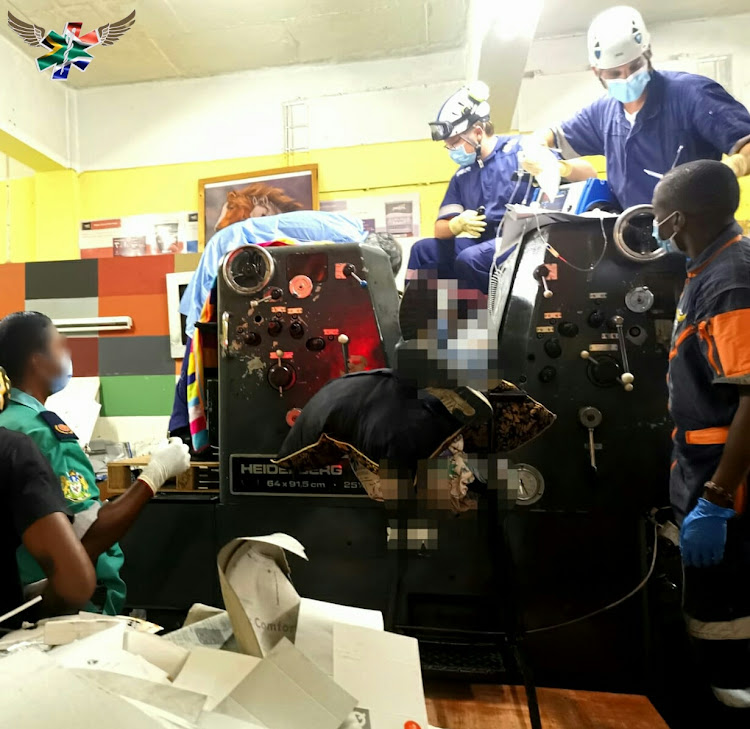 A medical team amputated a Durban factory worker's arm on site after it became stuck in a machine on Monday night
Image: Marshall Security Media

A medical team amputated the arm of a man at a Chatsworth factory after it became stuck in an industrial printing machine on Monday night.

Advanced life paramedic Sheldon Lombard said a Rescue Care team found the man, believed to be in his forties, with his arm stuck in the machine.

Lombard said paramedics stabilised the man while the eThekwini fire department and an engineer familiar with the machine made their way to the factory.

“Despite the efforts of the eThekwini fire department as well as the engineer it was deemed to be impossible to free the man's arm in a timely and safe fashion.”

Paramedics then consulted a surgeon about a field amputation.

A motorist was killed and several police vehicles were damaged on Friday when hundreds of people rioted over the closure of one of Patrice Motsepe's ...
News
11 months ago

“The surgeon as well as the equipment needed to perform the procedure was subsequently fetched from the above mentioned facility and escorted through to the scene.

“After arriving on scene the patient was assessed by the surgeon and prepared for the procedure. The surgeon, with the assistance of advanced life support paramedics, performed a field amputation of the patient's arm to allow for the patient to be freed,” said Lombard.

The man was transported to hospital.