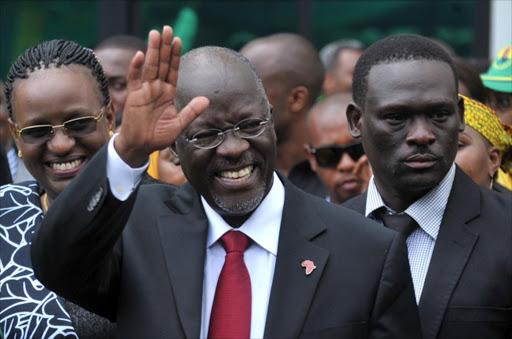 But the Namibian Broadcasting Corporation quoted Tanzania's ambassador in Windhoek, Modestus Kipilimba, as saying Magufuli was in good health and remained in Tanzania.
Image: Reuters/Sadi Said Via The Conversation

Tanzania's President John Magufuli is in good health and working normally, one of his diplomats has told a broadcaster in Namibia, countering reports he had been flown to hospital in Kenya and then India in a critical condition with Covid-19.

Magufuli, 61, who is Africa's most prominent coronavirus sceptic, has not been seen in public since Feb. 27.

Tanzanian opposition leader Tundu Lissu has cited medical and security sources for information that the president was flown to the private Nairobi Hospital in neighbouring Kenya and then on to India in a coma.

But the Namibian Broadcasting Corporation quoted Tanzania's ambassador in Windhoek, Modestus Kipilimba, as saying Magufuli was in good health and remained in Tanzania.

"High Commissioner Kipilimba dismissed the reports, saying Magufuli is in Tanzania going about his normal duties," NBC said, in what would be the first public comments from a Tanzanian official about Magufuli's situation since questions were raised.

Kenya's Nation newspaper cited unidentified political and diplomatic sources earlier this week saying that an African leader, which it did not name, was being treated for Covid-19 on a ventilator at the private Nairobi Hospital.

The hospital has said nothing.

In power since 2015 and nicknamed "The Bulldozer", Magufuli has played down the threat from Covid-19, saying God and remedies such as steam inhalation would protect Tanzanians.

He has mocked coronavirus tests, denounced vaccines as part of a Western conspiracy to take Africa's wealth, and opposed mask-wearing and social distancing.

Tanzania stopped reporting coronavirus data in May last year when it said it had 509 cases and 21 deaths, according to the World Health Organisation, which has urged Magufuli's government to be more transparent and to implement Covid-19 curbs.

Magufuli, a former chemistry professor from the village of Chato in northwest Tanzania, was first elected president in 2015. He has faced accusations from Western countries and opposition parties of eroding democracy, which he denies.

Tanzania's main opposition leader has demanded information on the health of President John Magufuli, a prominent Covid-19 sceptic whose absence from ...
News
1 year ago

A Tanzanian law that bans pregnant girls and teenage mothers from attending school is being challenged in Africa's top rights court by an ...
News
1 year ago
Next Article