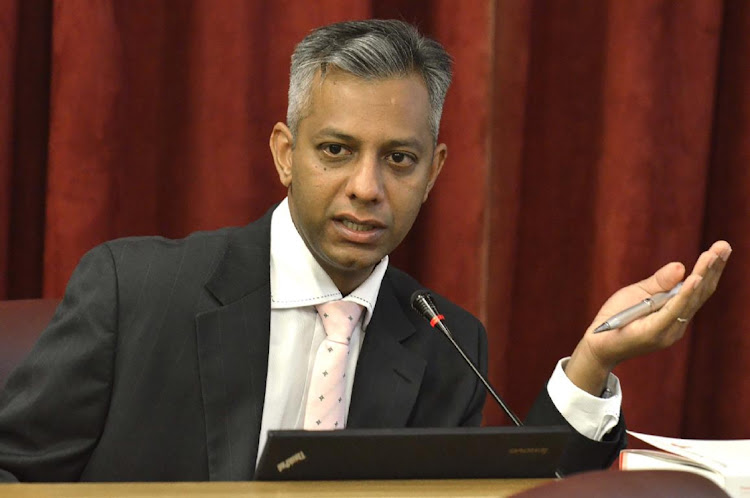 Former Transnet CFO Anoj Singh appeared to get emotional at the state capture inquiry 10 minutes before the lunch break on Friday.

Singh was being grilled on the testimony of “witness 3”, who claimed to have seen him visiting the Gupta family residence and the Knox Vaults.

Singh said the evidence from this witness was total fabrication as he had never driven Singh to the Gupta compound. He also denied ever receiving large sums of money from the Guptas.

His former driver and protector had also testified that Singh, during a Transnet strategy session at Three Rivers Lodge, had received a bag with money from Chinese men.

It was this part that saw Singh appear to get emotional at 12.50pm at the hearing in Braamfontein, Johannesburg.

Earlier in the day, Singh charged that he believed witness 3 had been coerced either by the inquiry or Transnet to implicate him. This was because his entire testimony was “fiction” about things that never happened.

On the former protector’s testimony that he drove Singh to the Gupta residence about 10 times, Singh denied he did so even once.

Singh admitted to visiting the Gupta home, but said he did so by himself, without his protector. He also denied the ex-bodyguard’s testimony that he occasionally visited the Knox Vaults after his Gupta visits.

“His entire testimony is a fabrication. The only thing I know is the inquiry was in possession of a list of people who had boxes at Knox Vaults,” said Singh.

The investigator who worked on Singh’s testimony denied the inquiry influenced witness 3 to frame Singh about visits to Knox Vaults.

Singh admitted he had “four or five” safety deposit boxes at Knox Vaults. The boxes, he explained, were to “store” his valuables, which included cash. The highest cash deposit he could recall was R100,000.

Where did the cash come from and why did he choose Knox Vaults instead of a home safe, asked evidence leader advocate Anton Myburgh.

“From time to time I had occasion to be involved in a family business. In some instances I would engage in gambling. I did also do some consulting work,” Singh said about the source of the money.

“The four boxes are easy to explain. There was a box for each one of the members of the family. The safety situation in SA was and is a serious concern for everybody.”

He told the chairperson that witness 3 had called him before submitting his affidavit to the inquiry.

In Singh’s “conspiracy theory”, he said the former protector intended to set him up while recording the telephone conversation.

Eskom paid R1.6bn to 'clueless' consultants to help it weather its financial storm

Consultants from Regiments Capital and McKinsey knew nothing about most of the work that Eskom paid R1.6bn for and had to be schooled on elementary ...
News
1 year ago

Former Eskom finance boss Anoj Singh has been stripped of his SA Institute of Chartered Accountants membership.
News
1 year ago
Next Article