Protests at Wits result in bystander being shot dead and students being injured and arrested, while installation of new vice-chancellor is postponed 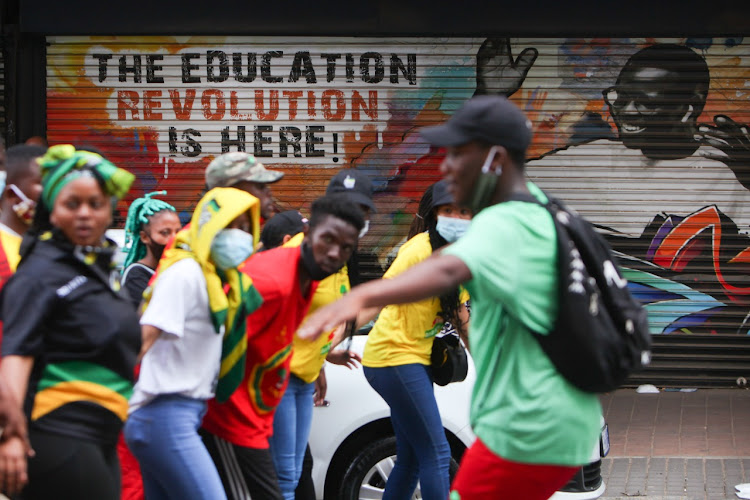 WARNING: This story contains a graphic image showing an injury sustained by a student, who was shot with a rubber bullet during protests on Wednesday.

Two young student journalists' first experience of reporting live from the scene turned traumatic as they were shot with rubber bullets.

The two female journalists, Nondumiso Lehutso and Aphelele Buqwana, were reporting on the protest at the Wits university over the financial exclusion of some students. The two were reporting for radio station VoW FM and campus newspaper Vuvuzela.

One person, a bystander, was shot dead and at least three students were arrested.

Meanwhile, the university confirmed that the official installation of newly appointed vice-chancellor Zeblon Vilikazi, scheduled for Thursday, had been postponed.

Spokesperson Shirona Patel told TimesLIVE that Vilikazi would instead be addressing a media conference on Thursday morning.

In a notice sent out on Wednesday night, university council chairman Isaac Shongwe said: “In light of the unfortunate events which occurred within the last 12 hours, including the escalated protest action and the tragic passing of a 35-year-old man in the Braamfontein CBD outside Wits University this morning, the installation event of the vice-chancellor is regrettably postponed. The university extends its condolences to the family of the deceased.

“We sincerely apologise for any inconvenience caused. The new date for the installation will be communicated in due course. Thank you for your understanding.”

Speaking of the incident involving student journalists Lehutso Buqwana, VoW FM station manager Shoeshoe Qhu said she was heartbroken and angry at what happened to the two students.

“I’m really sad that their first experience in live reporting turned out like this. As young journalists, the moment that they have always been waiting for arrived and they got to do what they always wanted to do. I’m upset that police saw the justification for their heavy-handedness on students,” she said.

Two Wits University student reporters were injured and three people arrested after violent clashes between protesters and the police in Braamfontein ...
News
10 months ago

The Independent Police Investigative Directorate (Ipid) says four investigating officers have been tasked to investigate the shooting in ...
News
10 months ago

According to Qhu, the police officer who shot at the students was the same one who had instructed them to run away from the scene.

“They told me that as they ran the same officer started shooting at them, and he seemed to be enjoying it as he was laughing as he shot at them. So it seems he instructed them to run just so he could shoot at them,” Qhu told TimesLIVE.

According to Qhu, Lehutso was discharged from Milpark hospital on Wednesday night after spending hours at the facility to have rubber bullets removed from her upper leg.

The other student, Buqwana, was still at the hospital as X-rays still needed to be done to assess the extent of her injuries.

Qhu said there was something wrong with how police handle student protests in the country.

“They are cordial when attending to other protests, but when it comes to students, they come with so much heavy-handedness. Students protesting for education always meet unparallel force. How do you come charging so hard on students who just want to get an education,” she said.

The South African National Editors’ Forum (Sanef) has condemned the conduct of police and called on the Independent Police Investigative Directorate and the national SAPS commissioner to investigate.

“We note that journalists already face multiple risks, in war zones and, increasingly, in conflict-free countries. Year after year, dangers have increased for journalism itself. We appeal to the government to take action to protect journalists and to discipline the officers,” Sanef said in a statement.

The forum has called on state’s law-enforcement agencies to honour their pledge to protect and to serve.

“They have a pressing obligation to defend journalism with all their strength against the many dangers that threaten it, of which gender-based violence and sexual bullying and attacks are a part. It is unthinkable that women journalists should endure twice the level of danger and must defend themselves on every front including malicious actions of SAPS officers,” Sanef said. 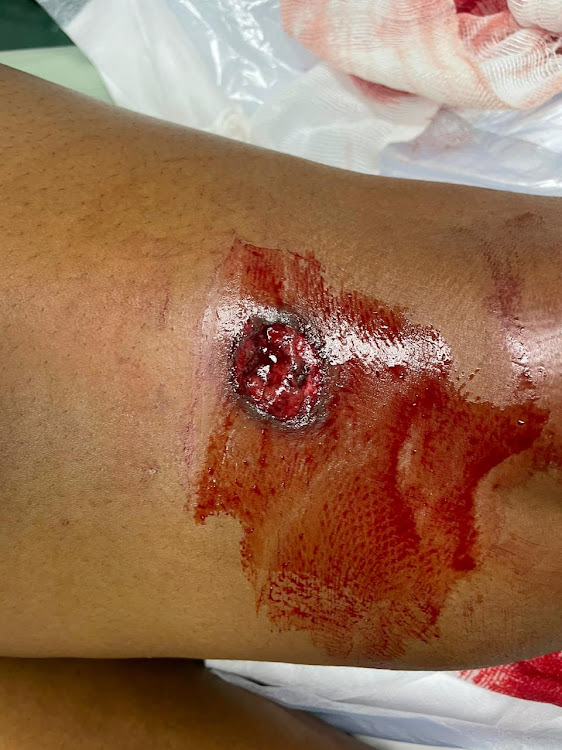 The injuries suffered by one of the student journalists, Nondumiso Lehutso.
Image: Supplied