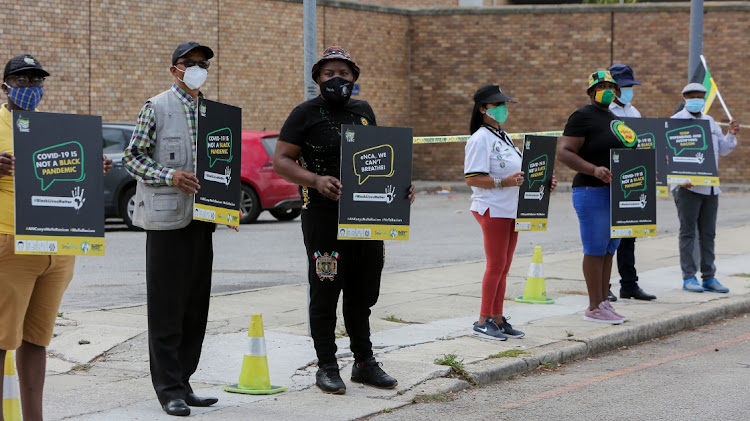 LOUD AND CLEAR: A handful of protesters staged a picket outside the Mount Road police station as part of a nationwide campaign against racism led by the ANC
Image: WERNER HILLS

Fewer than 20 people took part in the Gqeberha leg of the ANC’s nationwide antiracism picket on Tuesday, but their message was loud and clear — racism should be fought wherever it rears its ugly head.

The campaign was launched days after a public outcry from opposition parties and social media users after a clip emerged of eNCA journalist Lindsay Dentlinger asking black politicians to put their masks on before interviewing them while white political leaders she spoke to were not wearing masks.

The TV channel has publicly defended Dentlinger, saying she was not racist and had no malicious intent by asking some of her interviewees to mask up.

Dentlinger publicly apologised later for asking UDM MP Nqabayomzi Kwankwa and IFP MP Mkhuleko Hlengwa to wear masks though she interviewed FF Plus leader Pieter Groenewald and the DA’s John Steenhuisen while both men were not wearing their masks.

The UDM has laid a complaint against eNCA with the Broadcasting Complaints Commission of SA and the SA Human Rights Commission over the incident.

Hlengwa has said he will not be interviewed by eNCA until it revises its mask statement.

Gqeberha: the origins of the renaming of Port Elizabeth

The decision to rename Port Elizabeth was officially approved and gazetted by sports, arts and culture minister Nathi Mthethwa on Tuesday, but who ...
News
8 months ago

Similar pickets were held in other parts of SA.

In Gqeberha, a small group gathered in Lenox Street, outside the Mount Road police headquarters, holding up posters as part of their peaceful protest.

“Covid-19 is not a black pandemic,” one of the posters read.

Duarte said the party acknowledged Dentlinger’s apology but the incident showed there were fundamental issues with her actions.

“Sometimes we don’t believe that we are racist but it’s deep-rooted and what we observed was that this young lady, she apologised yesterday on television but doesn’t accept that there is something fundamentally wrong in what she did,” Duarte said.

“And the fundamental wrong is you cannot interview three black men in a row and you ask them to wear a mask and you interview four white men and you don’t, and they take off their masks and she doesn’t see that as a problem.

“Neither did eNCA see it as a problem and we worry that they did not immediately take the matter up and apologise and say ‘we’re going to fix this’.”

In Gqeberha, police officials closed the parking area outside the police station to make room for the picket because they expected a larger crowd.

A group of 15 protesters lined both sides of the street, prompting some motorists to hoot in support of their message.

Police spokesperson Colonel Priscilla Naidu said the protesters had arranged with the police that a memorandum would be handed over.

It is unclear why the memorandum was handed over at the police station because it lists a series of demands aimed at eNCA and its management, and requests the SA National Editors Forum and other media houses to distance themselves from eNCA’s actions.

Among the demands was a call for eNCA to withdraw its “offensive statement” defending Dentlinger, and to issue an unconditional apology to all South Africans “for the pain and hurt” the incident caused.

“eNCA must publicly acknowledge its history of mistreating its black journalists, some of whom have been forced out by the racially intolerable conditions at eNCA,” the memorandum said.

eNCA managing director Norman Munzhelele, who accepted the memorandum in Johannesburg, said the channel was committed to helping to build a nonracial society.

“We will do everything possible within our powers at eNCA to ensure that we transform, to ensure that our journalists, our management, are aware of racial issues of the country,” he said.

ANC in KZN says racism is endemic at eNCA

The ANC is demanding that eNCA explicitly apologise and demonstrate genuine remorse through practical antiracism steps within its organisation.
News
7 months ago

Jessie Duarte says eNCA must issue an unambiguous commitment to no longer tolerate racism within its ranks.
News
7 months ago

Reactions pour in as EFF descend on Brackenfell

The city of Cape Town gave permission for 100 protesters to demonstrate in Brackenfell, but hundreds arrived.
News
11 months ago
Next Article