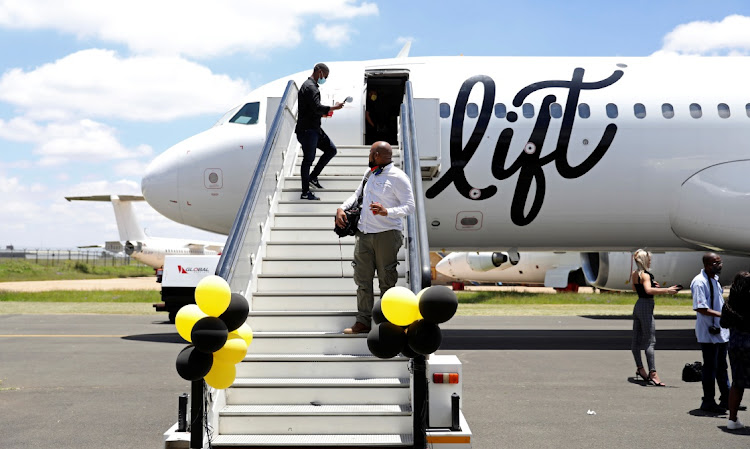 Airlines are prohibited from offering passengers anything other than bottled water, and no food may be brought on board by fliers, under new rules for domestic flights. File image.
Image: REUTERS/Siphiwe Sibeko/ File photo

Domestic air travellers are no longer allowed to carry a takeaway coffee or sandwich on board a flight, or buy anything to eat on board, thanks to a new on-board food ban imposed by the government.

Only bottled water may pass passengers’ lips, according to a notice published in the government gazette by transport minister Fikile Mbalula, effective from Tuesday.

FlySafair, the only domestic airline which had chosen not to sell or provide catering on board since domestic flights were allowed to resume last June, says it’s all about ensuring that passengers don’t have a reason to remove their masks mid-flight for more than a few seconds at a time.

Jonathan Ayache, CEO of SA’s newest domestic airline, Lift, said it was odd that the new restriction was brought in as the country moved to level 1, meaning a lessening of restrictions.

“And it would have been nice if airlines had been given a heads-up before the notice was gazetted,” he said. “But at least this change wasn’t as chaotic as the introduction of stricter curfews back in December.”

Feedback from aircrew yesterday was that passengers had generally been very understanding, he said.

“We’ve put notifications about the new no-food rule on our website but that doesn’t help those who have already booked flights, so we’ll be sending SMS notifications to them.

“If they miss those, ground crew will notify them so they can dump their sarmie before boarding.”

FlySafair’s Gordon said air travel and the spread of coronavirus had been “totally conflated” in people’s minds, “but what we forget is that people weren’t necessarily getting ill on aircraft, rather it was the act of infected folks travelling from one community to another that perpetuated the spread of the disease”.

“Several recent studies have confirmed that the sophisticated air filtration and management systems within modern airline cabins actually make them safer environments than most others, so much so that airlines around the world are permitted to fill their aircraft up without leaving open seats.”

The incidence of Covid-19 among FlySafair’s cabin crew since June 2020 was “very low”, he said.

Gordon quoted from a recent article published by the MIT Medical School, citing a 2018, pre-Covid study by the University of Florida which confirmed that there was a low probability of direct transmission of droplet-mediated respiratory diseases during airline flights, thanks to the air management system in modern aircraft.

“Importantly, that study was conducted before the introduction of face masks, which add an additional significant layer of protection.”

He conceded that not having catering during flights “does steal from the experience somewhat”.

“It’s also a revenue stream that we would love during this tough time, but at this stage, not offering catering is the right thing to do.”

Driving school operators say bookings can be made online only once a week and they are struggling to get slots for their customers.
News
10 months ago

Level 1 lockdown: here is what can get you fined or arrested

Dlamini-Zuma has stressed that several acts of defiance under level 1 can still result in offences and penalties.
News
10 months ago
Next Article