SA aims to vaccinate 1.1 million people by the end of March 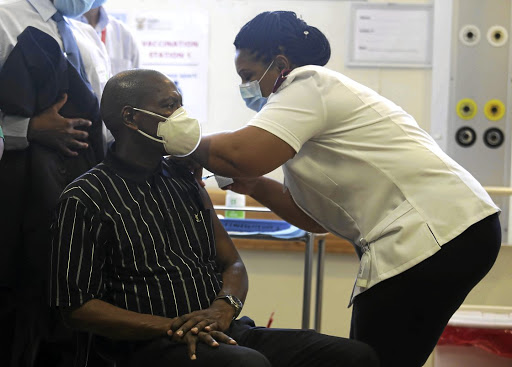 Health minister Zweli Mkhize said so far more than 32,000 health workers had been given the J&J shot.
Image: Esa Alexander

SA aims to vaccinate around 1.1 million people against Covid-19 by the end of March as it ramps up its immunisation programme, health minister Zweli Mkhize said on Thursday.

Addressing parliament, Mkhize said authorities might have to inoculate more than their original target of 40 million people to reach herd immunity.

Mkhize said so far more than 32,000 health workers had been given the J&J shot.

Previously, SA said it had secured 20 million doses from Pfizer and nine million from J&J.

But Mkhize said those numbers were just “opening negotiations” and final volumes were likely to be different. “Once it is finalised we will announce new numbers very soon,” he said.

Authorities had estimated that to ensure population herd immunity at least 40 million people needed to be vaccinated.

However, “as we go on with our discussions, it does appear we may have to do more than 40 million”, Mkhize told parliament.

Mkhize, a trained medical doctor, said on Tuesday that government advisers had grouped Covid-19 vaccines into three categories and those considered for “immediate use” were the J&J, Pfizer and Moderna shots.

A health ministry presentation on Thursday said “full licensing” through local medicines regulator Sahpra for J&J's vaccine could take “a couple of months”.

The million AstraZeneca doses procured by SA three weeks ago have been sold to the AU, health minister Dr Zweli Mkhize told the National Assembly on ...
News
1 year ago

Health minister Zweli Mkhize's attempts to reassure parliament of the efficiency of SA's Covid-19 vaccine rollout strategy has been met with mixed ...
News
1 year ago
Next Article