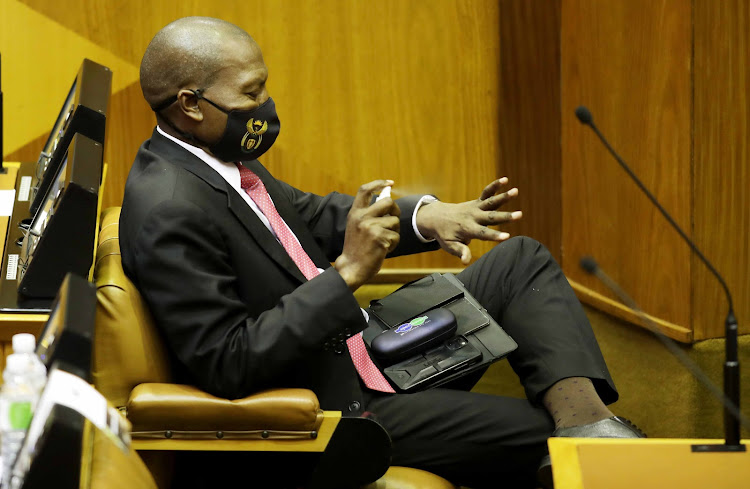 Health minister Dr Zweli Mkhize's attempts to reassure MPs on the effectiveness of the country's Covid-19 vaccine roll out was met with mixed reactions from MPs.
Image: ESA ALEXANDER/SUNDAY TIMES

Health minister Zweli Mkhize's attempts to reassure parliament of the efficiency of SA's Covid-19 vaccine rollout strategy has been met with mixed views among MPs, who either applauded or suggested it was a crisis waiting to happen.

Speaking in the National Assembly on Tuesday, where the rollout plan was debated on an urgent basis after an application by the DA, Mkhize said SA had vaccinated 23,059 health workers as of Monday.

EFF MP Mbuyiseni Ndlozi went on the offensive. “How do you vaccinate 23,000 people in four days, you are incompetent ... This is a crisis,” he shouted.

Mkhize said SA had joined 87 countries globally in the next phase of the fight against Covid-19, saying all was on track to vaccinate 80,000 health workers within two weeks of the arrival of the first batch.

The arrival of the first batch of J & J vaccines was nothing to rejoice about or celebrate because it was a “drop in the ocean” charged EFF MP Suzan Thembekwayo.

Mkhize said SA would receive another batch of the vaccines this week.

J&J vaccine is not yet official, say experts

Government bungled the vaccine rollout such that after the AstraZenneca controversy it withheld information on last week's limited vaccine trial on ...
News
1 year ago

“It is also my pleasure to announce that the next batch of 80,000 doses of Johnson and Johnson vaccines will arrive this Saturday. Our health-care workers, who are our front-line soldiers and main defence in fighting this virus, have not been spared the devastating effects of the second wave in SA, driven by the 501Y.V2 variant,” he said.

With more than 54,685 health workers who were infected with Covid-19 in the public sector and 779 having died, Mkhize said it was important for them to be vaccinated first as they were three to four times more likely to contract the virus.

“For them, vaccination represents hope, relief from the unrelenting pressures of this pandemic. It is for these reasons that we did everything in our power to ensure that key developments in the characteristics of the virus did not derail us from our plans to begin vaccination in February.

“We were never asleep, we chose a strategy that was guided by science as we did not have the financial muscle to make unhedged bets,” said Mkhize.

MPs expressed a range of concerns, including about the country's ability to store the vaccines at suitable temperatures, the financing of the vaccines, procurement processes, corruption, possible theft and an over-reliance on other countries.

Mkhize responded to some concerns but shunned others.

“Our approach has paid off as we have been able to be nimble and [be] precise around the tricky issue of the variant. The procurement of the vaccines has been a complex process that required negotiations with multinational manufacturers of vaccines in the face of vaccine nationalism and protectionism,” he said.

“Just recently, it was announced that more than 133 poor countries across the globe have not received a single dose of the vaccine — primarily because the richer countries have used their financial muscle to procure vaccines on risk and far in excess of what they need. Be that as it may, even those countries now battle to get the suppliers to meet their obligations as global production capacity is tested beyond its limits,” he said.

Angry MPs have accused international relations and cooperation minister Naledi Pandor of abusing a parliamentary report on irregular spending for her ...
News
1 year ago

IFP MP Mkhuleko Hlengwa conceded there were many flaws in the rollout strategy but said government deserved to be given “the benefit of the doubt”.

He said the flaws needed to be addressed urgently, before a bigger consignment of vaccines arrived. Commenting on storage capacity, Hlengwa raised concerns around  power cuts by Eskom which may damage vaccines.

Mkhize admitted that the rollout was the most complex and ambitious public health undertaking in SA's history.

He said SA had signed non-disclosure agreements with many leading manufactures which provided insight into their supply lines, manufacturing plans and possible blockages in the manufacturing pipeline.

“It also allows us to pursue negotiations over prices, volumes and timelines for delivery,” he said. “It is within these [non-disclosure agreements] that certain other conditions come to light. Among these have been the principles of indemnity to be provided by government to its citizens for any adverse effects arising from vaccinations. Some companies have required that we create a no-fault compensation fund as an expression of such indemnity,”  he said.

“The minister must not take all the criticism he received today too seriously, it is all thunder and not lightning. Minister we are proud of you, we support your rollout plan,”  said Hendricks.

Mkhize added that SA had placed large orders for J & J and Pfizer vaccines which are to be finalised in the next few days. Announcements will be made when the orders are confirmed. Discussions were ongoing with Moderna, Mkhize said.

Healthcare workers line up to receive their jabs

The vaccination of front-line workers took off yesterday with a pledge that there would be enough vaccines to inoculate 40m people, or two-thirds of ...
News
1 year ago

President Cyril Ramaphosa and health minister Zweli Mkhize will be among the first group of those receiving  the Johnson & Johnson Covid-19 vaccine ...
News
1 year ago
Next Article