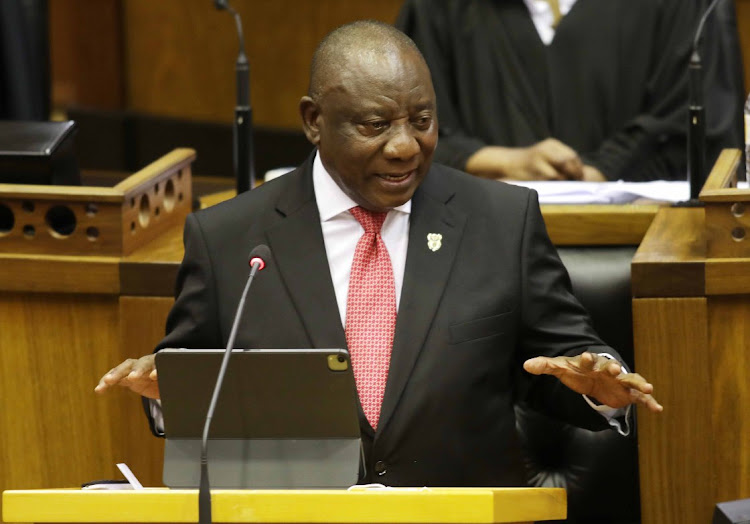 President Cyril Ramaphosa says South Africans should be concerned 'when those who occupy prominent positions in society make statements that demonstrate a disdain for the basic principles of the constitution and the institutions established to defend democracy'.
Image: Esa Alexander

President Cyril Ramaphosa has come out in defence of the judiciary after recent attacks on judges by EFF leader Julius Malema and former president Jacob Zuma.

In his weekly newsletter on Monday, Ramaphosa slammed allegations against judges made without proof.

Zuma has accused judges of being paid by Ramaphosa in the former president’s recent conflict with the law after he refused to appear at the inquiry chaired by deputy chief justice Raymond Zondo to answer for his role in allegations about state capture.

Malema, in his speech during the debate on the recent state of the nation address by Ramaphosa, made similar allegations against the judiciary.

Ramaphosa said South Africans should be concerned when those who occupy prominent positions in society make statements that demonstrate a disdain for the basic principles of the constitution and the institutions established to defend democracy.

“Of particular concern are recent utterances directed at the judiciary in which some judges are accused, without any evidence, of pursuing interests other than the cause of justice.

“Firstly, if such claims were true, it would mean there are some within the judiciary who are failing to uphold the values and principles with which they have been entrusted,” said Ramaphosa.

He said the constitution makes provision for parliament to remove judges who are found by the Judicial Service Commission (JSC) to be guilty of gross misconduct.

“The JSC is a carefully constituted body which includes representatives from the judiciary but also the legal profession, academia and parliament. There are clear processes established in law to deal with allegations of misconduct against members of the judiciary.

“Anyone who has evidence of any wrongdoing by any judge should make use of the avenues provided in our constitution and in our law to ensure appropriate action is taken,” said Ramaphosa.

He said without the presentation of evidence to support the claims against the judiciary, all that such allegations do was to undermine the judiciary and the important function it performs in our democracy.

“Of course, SA is a free country, with a constitution that guarantees freedom of expression and opinion. However, when some in positions of responsibility choose to use those freedoms to undermine our constitutional order, they should be reminded of the possible consequences of their utterances.

“One of these possible consequences is the erosion of trust in the judiciary and our constitutional order,” said Ramaphosa.

The president said attacks on the judiciary should not be taken lightly because they shake the foundations of our constitutional democracy.

“Unless supported by evidence, such claims undermine confidence in our courts, and weaken our constitutional order. In all our actions, we need to take heed of section 165(3) of the constitution, which says ‘no person or organ of state may interfere with the functioning of the courts’.

“We interfere with the functioning of our courts and weaken the rule of law when we attack the judiciary. Our failure to implement our courts’ injunctions weakens our constitutional democracy.”

Malema takes aim at the judiciary in fiery post-Sona speech

EFF leader Julius Malema has accused certain judges of receiving bribes from white businesses, while warning of an uprising against the judiciary if ...
News
1 year ago
Next Article