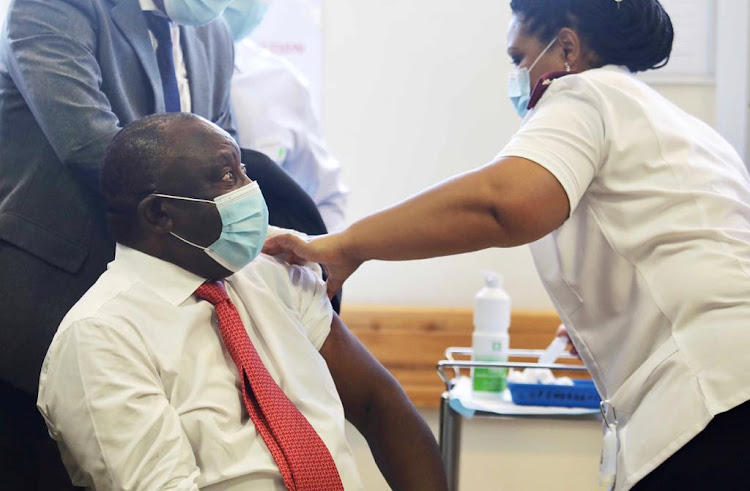 Ramaphosa gets his jab in the arm
Image: Esa Alexander

President Cyril Ramaphosa on Wednesday said he believes the countrywide vaccination process is going to be flawless and straightforward.

“It is going to be done effectively and as we get more and more of these vaccines, as the minister brings them in, I think we will be able to vaccinate up to the 40 million South Africans that we should,” said Ramaphosa.

LISTEN | ‘Can I close my eyes?’ Ramaphosa has Covid-19 jab with Khayelitsha hospital staff

Speaking shortly after being inoculated with the newly acquired Johnson & Johnson vaccine at Khayelitsha District Hospital in the Western Cape, Ramaphosa thanked the staff for their efficiency in administering the vaccines which arrived in SA on Tuesday.

Ramaphosa and health minister Zweli Mkhize were among the first South Africans to be vaccinated.

“Minister Mkhize spent sleepless nights making sure that the change from the earlier vaccines that we had acquired — which were found to be not so effective against the variant we have — happened so quickly and so smoothly.

“I can tell you now that he spent sleepless nights sending me text messages almost every hour and it was a joy to finally get his text message that ‘President, the plane has now left Brussels,’ and then he showed me the photograph of the plane as it was being loaded and every step of the way.

“So I am really glad and he’s been so focused and working so hard, so thank you, minister - and MEC Dr (Nomafrench) Mbombo would like to thank you too. I did say that our provinces are really ready for the vaccination process and I was glad to see that there are many people that have been trained here.”

Ramaphosa said health-care workers were initially trained to administer the AstraZeneca vaccine and instantly readjusted to the Johnson & Johnson version.

“It does show that our health system is robust, is agile, is effective and our health workers are able to get up to speed very, very quickly. I saw a real army of our health-care workers, all knowledgeable about what we are now doing.”

President Cyril Ramaphosa and health minister Zweli Mkhize will be among the first group of those receiving  the Johnson & Johnson Covid-19 vaccine ...
News
1 year ago

Ramaphosa is all foam and no beer

I remember when Cyril Ramaphosa first became president of the country. Because of the perilous state of our economy and the catastrophic levels of ...
Opinion
1 year ago

Ramaphosa said the moment was a significant milestone for the country.

“This is a new era for us and an era that will mean that yes, we restore the health of our nation - and we do so through our health system that is robust, that is gaining strength on an ongoing basis.”

To those criticising the government’s handling of the vaccination rollout, Ramaphosa said: “I would like to say to all the doomsayers who have been preaching that there is going to be total mayhem and disaster, I think let’s all have hope and faith in our system, in our health workers and let’s give them an opportunity to do what they do best because they know how this vaccination process is going to unfold.

“For us in government, we will continue to give them support and help and all the assistance that we are able to give them.”

Ramaphosa took a moment to thank the staff who treated him. “I am hoping they will be able to treat every South African that will walk through these doors as well as they treated me,” he said.

Meanwhile, Mkhize on Tuesday confirmed that the one million Oxford/AstraZeneca vaccines which arrived in SA two weeks ago will be offered to other African states.

The vaccines, which were procured from the Serum Institute of India and arrived in SA on February 1 to much fanfare, were found to have limited efficacy against mild and moderate disease caused by the Covid-19 variant that is dominant in SA.