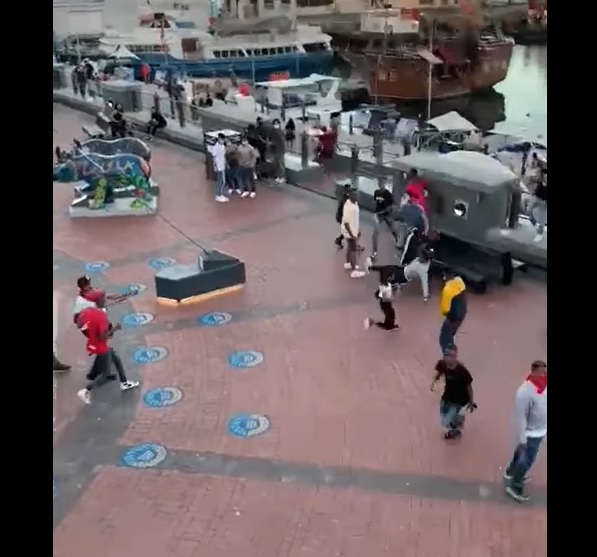 Waterfront spokesperson Donald Kau said a fight between a group of youngsters broke out at the Victoria Wharf Shopping Centre on Saturday.
Image: Screengrab of video

The V&A Waterfront in Cape Town has beefed up security after a stabbing incident involving youngsters at the weekend.

Waterfront spokesperson Donald Kau said a fight between a group of youngsters broke out at the Victoria Wharf Shopping Centre on Saturday.

“We don’t know the cause of the fight and are reviewing video footage of the incident. We  will interview our own security personnel and get further details from their report,” said Kau.

During the brawl, one teen was stabbed in the back, said Kau.

He said ER24 were called to attend to the victim at the scene. He was later released to his family, who arrived to fetch him.

No other casualties were reported.

Western Cape police said no case had been opened.

Kau said a police case would allow Waterfront management to help police identify and apprehend those involved in the fracas.

“We would encourage them to open a case,” he said.

“The V&A manages a comprehensive security operation with security personnel on foot, motorbikes and vehicles, including armed and fast response, as well as CCTV and other measures.

“This is an isolated incident and we’ve immediately increased personnel on the weekend to monitor the situation.”