2021 is the year for speeding recovery - Ramaphosa 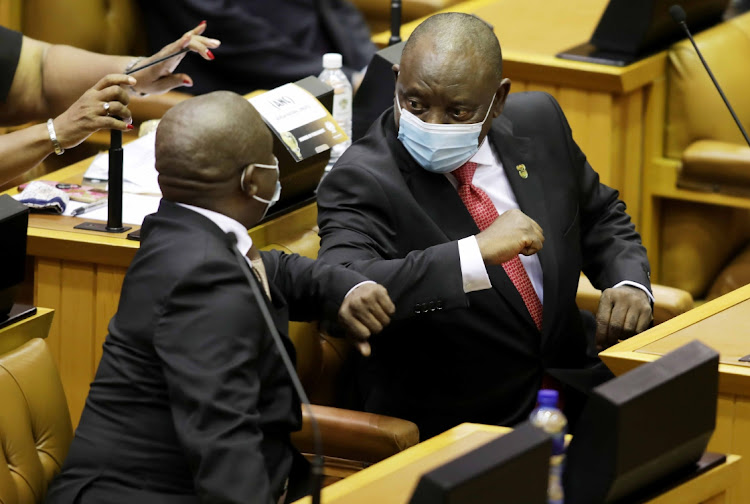 President Cyril Ramaphosa has declared this year as the year for change and rebirth with rigorous plans towards a speeding economic recovery by the end of this year.

Speaking during the State of the Nation Address (Sona)  on Thursday night in Parliament in front of 15 MPs, Ramaphosa said SA a needed to focus its energies on economic recovery following a tough 2020 that was marred by losses of lives and decline in economy.

Last night, marked day 322 since the country went into lockdown which has since seen just over 46 000 lives being lost and over 1.5 South African being infected by Covid.

“Beyond these statistics lies a human story of tragedy and pain. There is no family, no community and no place of work that has not lost someone they knew, worked with or loved. It’s also a story of courage and resilience…The year ahead must be a time for change, for progress and for rebirth. This is no ordinary year and is no ordinary Sona,” said Ramaphosa.

He said the government will also focus on a massive rollout of infrastructure throughout the country, increase local production, employment stimulus and rapid expansion of energy generation capacity.

The EFF on Thursday criticised the heavy police presence in parliament for the state of the nation address.
News
1 year ago

He said the state has developed an infrastructure investsment project pipeline worth R340bn to focus on industries such as energy, water, transport and telecommunications. This will include rehabilitation work on the N2, N3 and N1 highways with the aim to revive the struggling construction industry. He added that the draft master plan for the construction of the Lanseria Smart City , which will house 350 000 to 500000 people in Gauteng, has been completed and is now up for public comment.

The Project Pipeline will also see the building of student accommodation with 3000 000 beds and the roll out of broadband to schools, hospitals, police stations and other government facilities.

“The Recovery Plan is to support a massive increase in local production and to make SA exports globally competitive…Furthermore the departments of Small Business Development and Trade, Industry and Competition are supporting SMMEs to access larger domestic and international markets,” he said.

Ramaphosa said one of his government's priority interventions was  massive increase in local production by encouraging, adding that this commitment should lead revival of manufacturing industry. He said his government would reduce reliance on imports by 20% in the next five years.

“We have worked to facilitate investment by increasing the ease of doing business, including by making it easier to start a business in SA.”

He announced that the R350 social relief grant will be extend by a further three months while Temporary Employer/Employee Relief Scheme (Ters) have also been extend to March 15 only for sectors that have not been able to open during the lockdown. To date, government has spent R57billion on Ters for 4.5million workers.

President Cyril Ramaphosa announced that there would be a review of the Eskom tariff system to ensure that it reflects the power utility's costs to ...
News
1 year ago

Vaccinating as many people as possible, as quickly as possible, is critical for saving SA's economy, businesses, and livelihoods - all while boosting ...
News
1 year ago

The much-anticipated, but frequently delayed, switch from analogue to digital TV transmission will begin in March, President Cyril Ramaphosa said on ...
News
1 year ago
Next Article