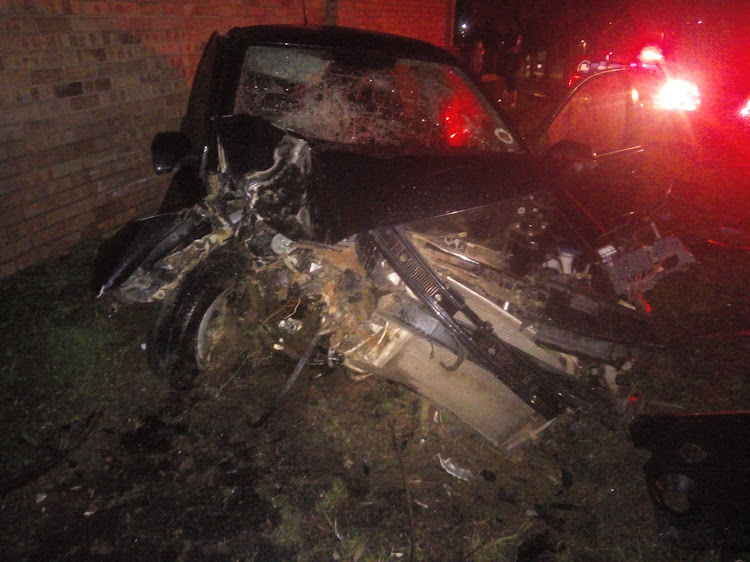 Five young adults were lucky to survive when they drove into a tree in Mondeor, south of Johannesburg, on Saturday night.
Image: ER24

Five young adults were seriously injured when the car they were travelling in collided with a tree in Mondeor, south of Johannesburg, on Saturday night.

The entire front part of the vehicle was torn into pieces, with the engine components ripped off and left strewn on the ground.

ER24’s Ross Campbell said paramedics arrived at the scene just before 9pm, along with Johannesburg metro police and other law enforcement officers.

“Two females and three males, all between the ages of 19 and 25, were found injured on the scene. The critically injured female driver was found still entrapped in the vehicle and had to be extracted from the wreck,” Campbell said.

He said the other four passengers had suffered serious injuries and all five were treated with advanced life support interventions by the various paramedic services on the scene.

Durban has seen a spike in vehicle accidents and incidents of domestic violence after the government lifted the prohibition of the sale of alcohol ...
News
11 months ago

Campbell said details surrounding the accident were not known at this stage, but were being investigated.

Meanwhile, ER24 reported that two people died and three were ejected in a head-on collision between two cars near the Kokosi turn-off on the N12, Fochville, shortly before 11pm on Saturday. Among the injured was a six-year-old.

One of the adult males was entrapped in one of the vehicles when paramedics arrived at about 10.50pm, and was declared dead on arrival. A second adult male was treated on scene and then taken to hospital, but later died due to his injuries.

The six-year-old and the mother were also treated on the scene, as was a teenager and a man in his early 20s, who had both sustained moderate injuries.