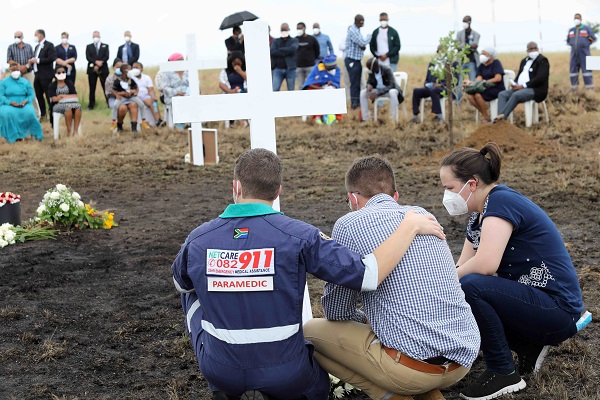 Families and colleagues of the health workers and a pilot who perished are seen at the crash site on Wednesday last week.
Image: Supplied

The Netcare 911 helicopter unit has mourned the loss of five staff who died in a helicopter crash, honouring their lives and the work they did.

The aircraft crashed near Bergville, in northern KwaZulu-Natal, on January 21, claiming the lives of all on board.

In a video shared on social media, a convoy of ambulances, paramedics, doctors and nurses can be seen driving in honour of their fallen colleagues.

“There is no greater act of humanity than to lose one's life in attempting to rescue the life of another,” said Netcare group CEO Dr Richard Friedland.

Watch the full video below

Last week, families of the deceased visited the accident site, where a “moving ceremony” was held for the “five extraordinary individuals”.

Netcare described the day as a painful one punctuated with deep shock and disbelief.

The group said it was a long, emotional day for the families, loved ones and colleagues of the deceased.

The pilot's wife, Candice Stoxreiter, opened up about how she told her two children that their father will never come back home.

The pair met through mutual friends in 2002 and had been married for more than 10 years.

“We have a very open relationship with our children and I very caringly shared the news that daddy won’t be coming home,” she told SowetanLIVE's sister publication TimesLIVE.

Candice said she found out later on the day of the accident that her husband had died in the crash.

“I was filled with disbelief and thought I just had to find my husband and bring him home,” she said.

The families of four Netcare healthcare workers and a pilot that died in a helicopter accident last week Thursday were today honored in a private ...
News
10 months ago
Next Article