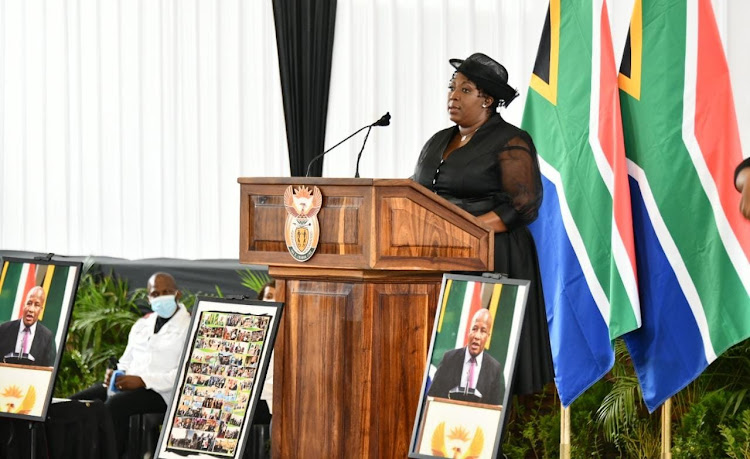 There was an outcry after Mpumalanga premier Refilwe Mtsweni-Tsipane was seen at Jackson Mthembu's funeral at the weekend while failing to wear her face mask.
Image: Twitter / SA Government

The premier failed to wear a mask during the funeral of minister in the presidency Jackson Mthembu at the weekend - something that she has apologised for.

“The matter was handled badly from the side of the police, there is no doubt about that,” said Cele, in an interview with TimesLIVE on Wednesday.

Mthembu, who died of Covid-19 complications last Thursday, was at the forefront of advocating on behalf of government the importance of adhering to the coronavirus rules and regulations.

Mtsweni-Tsipane was shown on national television not wearing a mask while attending Mthembu’s funeral service on Sunday. Shortly after she made her speech at the service, deputy president David Mabuza signalled to the premier that she was not wearing her mask - but still she did not wear the mask, which was in her hands.

Mpumalanga premier Refilwe Mtshweni-Tsipane says she has paid an admission of guilt fee and will be donating 1000 masks to Emalahleni residents ...
News
11 months ago

Later on, she was again seen without a mask while hugging a senior police officer at the Old Pretoria Road Cemetery in Emalahleni.

She has since signed an admission of guilt statement at the Vosman police station in Witbank and issued a public apology.

According to a SABC report, the EFF in Mpumalanga has opened a criminal case against Mtsweni-Tsipane for failing to adhere with Covid-19 regulations of wearing masks, at all times, in public spaces.

The first thing the officer should have done is to tell the premier to put the mask on immediately, or she should have been arrested - and both those things did not happen.

Speaking to TimesLIVE, Cele said the police were investigating the matter.

“On January 23 I was in KwaMashu ... and there was a young boy who did not have a mask, and according to regulation 34 [of the Cogta-issued Covid-19 laws] we need to warn you to put on your mask before we act on it. So we warned this young boy and he said he did not have a mask and had never owned one,” he said.

“This means that our warning did not work and so we had to arrest the boy, and the arrest was done in front of television cameras. But, fortunately, there were women selling masks nearby and somebody bought a mask for the boy and then the young man was let go.

“Now people will say, 'But you arrested the young man and you did not arrest the premier and instead we invited her to go to court.' But there have been two investigations on the matter and people blasted me, saying there shouldn’t be an investigation and that I am wasting state money because it was obvious what had happened.”

Cele said while it appeared obvious, the matter still needed to be investigated.

“That is what the national police commissioner [Gen Khehla Sitole] has done by instructing the provincial commissioner to investigate. So on the side of the police, they have done their work.”

State security deputy minister Zizi Kodwa has called out Mpumalanga premier Refilwe Mtsweni-Tsipane for not wearing a mask at the funeral of late ...
News
11 months ago

Cele said the regulations provided the option for the transgressor to either pay an admission of guilt fine or be taken to court and tried, or both.

“So the premier was taken to the police station, she wrote a statement at the police station and we have taken fingerprints and she has paid an amount determined by the magistrate of R1,500. So from the side of the police, we are done,” he said.

Cele added: “So now people are saying, 'What about the criminal record?' The fact that she is a premier and she has a criminal record is not a matter for the police to get involved in, another organ of state should handle that.”

The police minister pleaded with South Africans to try to avoid getting unnecessary criminal records.

“I have heard that there will be further action taken [against her] but I am not sure what it is, and it is not my terrain to determine what to do with a premier with a criminal record. I heard there are calls being made and people saying that we cannot be led by a person with a criminal record, but that is not for the police.”

He said the senior police officer who hugged the premier at Sunday's service was also being investigated.

“I am still waiting for a report as to how on earth does a very senior police general allow the law to be broken in front of her when the premier came close, hugging her.

“There were two things that were supposed to happen there. The first thing the officer should have done is to tell the premier to put the mask on immediately, or she should have been arrested - and both those things did not happen.

“So there should be internal disciplinary taken against this very senior officer who did not do her job in front of the world.”