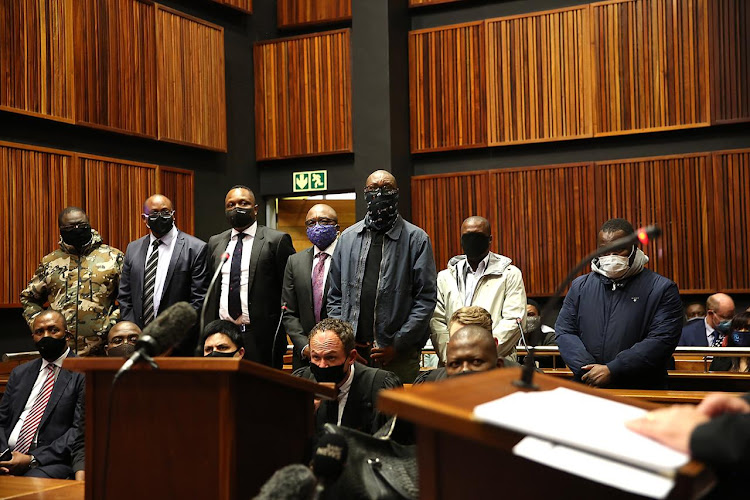 Seven suspects arrested in connection with the multibillion-rand plundering of VBS appeared in the Palm Ridge Regional Court on October 8 2020. They appeared again on Tuesday and their case was postponed until March 26.
Image: ALON SKUY

More arrests are expected in the alleged looting of the VBS Mutual Bank ahead of the next court appearance in March.

This emerged in the Specialised Commercial Crimes Court sitting in the Palm Ridge Regional Court on Tuesday, where seven men arrested in connection with the looting of the bank appeared.

The case was postponed to March 26.

The state said it was going to obtain the expanded racketeering certificate from the National Director of Public Prosecutions and add the additional accused ahead of the next court appearance, citing delays due to the  Covid-19 pandemic.

The accused face 47 charges which include fraud, theft, money laundering and racketeering for their alleged role in the collapse of the bank which was allegedly looted to the tune of R2bn.

The bank's former CFO, Phillip Truter, who was the eighth accused in the matter, was sentenced to 10 years in prison after pleading guilty and offering to turn state witness in October last year.

A Limpopo municipality which lost R80m in the now defunct VBS Mutual Bank is gunning after two former accounting officers to recover the money.
News
1 year ago

Of the 10 years, seven is direct imprisonment while three years has been suspended for five years

The VBS scandal first broke after a report by lawyer Terry Motau and Werskmans Attorneys, released in October 2018, showed that the bank, used largely by the poor in Limpopo, was looted by politically connected individuals of around R2bn in over three years.

An ANC member who successfully challenged a decision by the party to overlook him when a vacancy was declared in council says the party is playing ...
News
1 year ago
Next Article