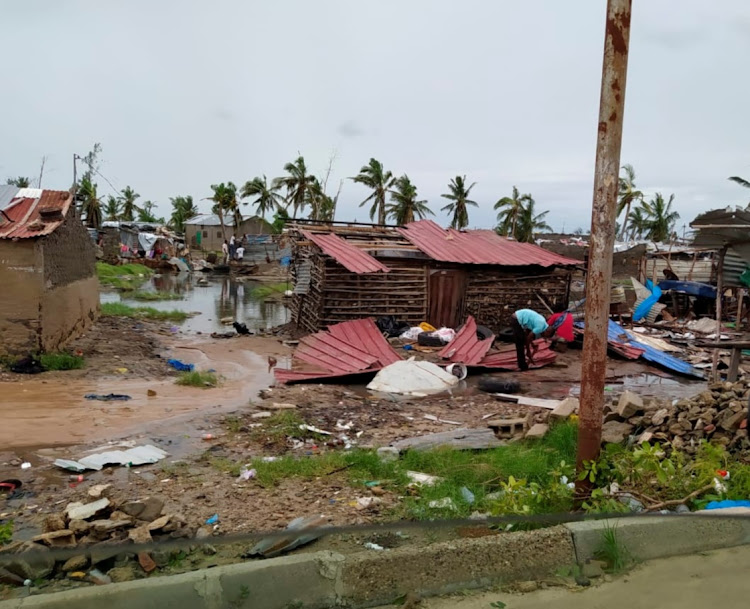 View of the damage after Tropical Cyclone Eloise, in Beira, Mozambique this week in this social media image obtained by REUTERS.
Image: SOCIAL MEDIA

Crowded centres for people left destitute by Cyclone Eloise in Mozambique create the perfect conditions for Covid-19 to spread, with some living at least 10 to a tent with no access to water, soap or masks, an international aid group said on Tuesday.

Cyclone Eloise, which made landfall in Mozambique in the early hours of Saturday, weakened into a tropical storm as it moved inland to Zimbabwe, South Africa, eSwtatini - formerly Swaziland - and Botswana.

The death toll across the region rose to 14 on Tuesday after South Africa reported one more death.

Crops, homes and infrastructure have also been destroyed, and thousands displaced in Mozambique in particular, in an area still recovering from Cyclone Idai in March 2019.

Some 93,418 people were already displaced in four provinces affected by Idai, which killed more than 1,000 people across Mozambique, Zimbabwe and Malawi, before Eloise struck. In the port city of Beira alone, 8,700 people are living in 16 temporary shelters after their homes were destroyed by the cyclone.

"Each tent I saw had at least 10 people packed into it and families are lacking access to safe water and essential items like soap and face masks," said Marcia Penicela, project manager at ActionAid Mozambique following a visit to sites.

She said ActionAid was concerned that COVID-19 would spread rapidly in the overcrowded centres, and that urgent needs included a variety of basics from food and water to shelter.

Espinola Caribe, head of the World Food Programme's Beira sub-office, also said Covid-19 was a concern, but people had to be moved out of danger.

"This was not a planned evacuation... this was running for your life," he said.

The WFP was now due to start helping the government with supplying food to the accommodation centres.

The United Kingdom's foreign office on Tuesday said it was providing up to £1 million ($1.37 million) of emergency aid to Mozambique, and was also sending a team of relief workers to assess the damage and humanitarian needs. ($1 = 0.73 pounds)

Cyclone Eloise has wreaked havoc in Mpumalanga, Limpopo and neighbouring Mozambique, blowing away houses and leaving many without shelter.
News
7 months ago

The death toll from tropical storm Eloise rose to at least 12 on Monday, according to figures from authorities across southeastern Africa, where ...
News
7 months ago
Next Article