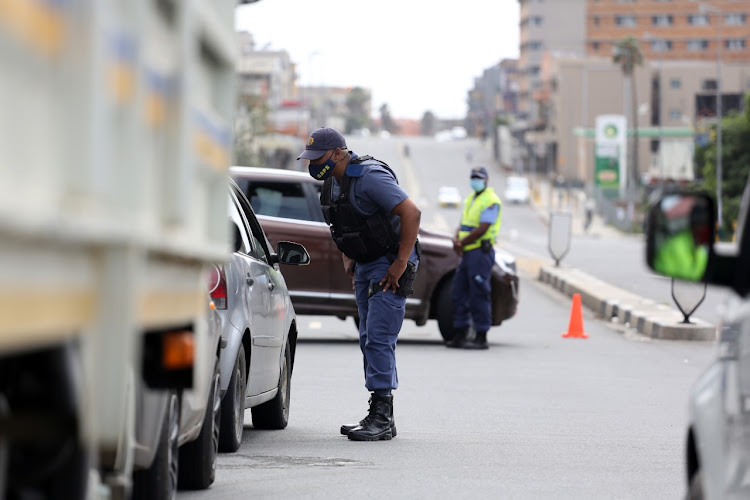 In Tshwane, more than 347 suspects were arrested for crimes during weekend operations when police conducted roadblocks and stop and searches.
Image: Mark Andrews/File

Police arrested 30 people at a house in Vanderbijlpark, Gauteng early on Sunday morning at a social gathering in contravention of the Disaster Management Act adjusted alert level 3 lockdown regulations.

“Police received information about people having a party in Vanderbijlpark. They pounced on the identified house and found more than 30 people drinking alcohol at about midnight and not adhering to the curfew,” said police spokesperson Capt Kay Makhubele.

He said more than 115 suspects were arrested at a roadblock set up in Vanderbijlpark on Saturday.

Makhubele said seven vehicles were impounded and drugs and firearms were seized.

In Kagiso, a team comprising members from Public Order Policing and Visible Policing targeted the open space behind Kagiso Cemetery and arrested eight people for illegal mining on Friday.

Illegal mining equipment was confiscated during a routine patrol.

In Tshwane, more than 347 suspects were arrested for crimes during weekend operations when police conducted roadblocks and stop and searches.

Makhubele said motorists who were found transporting liquor and illicit cigarettes were arrested.

The arrested suspects will appear in different magistrate’s courts on Monday.

Police have had their hands full with peddlers of illicit substances.
News
1 year ago

More than 7,000 arrested since December for not wearing masks: Bheki Cele

About 7 500 people have been arrested for not wearing a mask and over 800 for liquor-related infringements since lockdown level 3 began 16 days ago.
News
1 year ago
Next Article