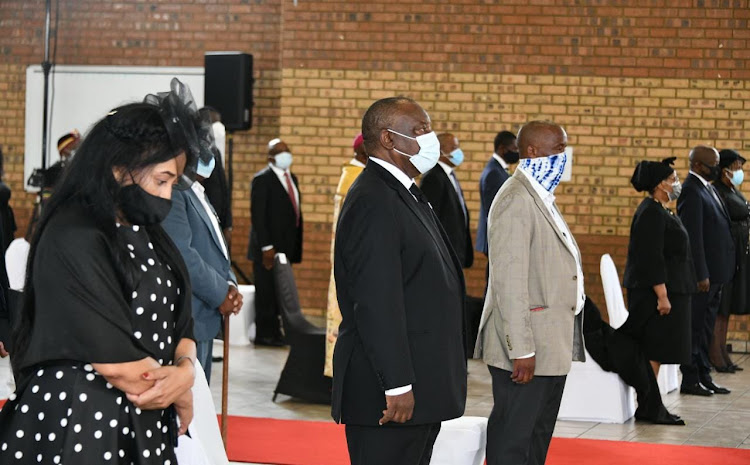 As the ANC embarks on a journey of rebuilding and renewal, President Cyril Ramaphosa on Sunday called on men and women to lead with “honour, integrity, principle and conviction”, just as the late minister in the presidency Jackson Mthembu did.

“As we pay homage to him today for what he was, a servant of the people who loved the people of this great land and put them above the love of party, of leader or of self, it is not enough to just eulogise him, we must complete what he was not able to finish in his own lifetime.

“The course of renewing and rebuilding his beloved movement, of restoring our nation’s faith and of building an ethical state that is led by men and women of honour, of integrity, of principle and of conviction.

“Minister Mthembu was a kind and gentle soul but when it came to corruption, to self-serving leadership, abuse of power, you would see another side of him. He was never deceived by the false smiles and empty promises of those who sought to enrich themselves at the expense of the poor or the weak, he called them out and he didn’t care if they were more powerful than him.”

Ramaphosa said this while paying homage to Mthembu, who died of Covid-19 related complications on Thursday at the age of 62.

The funeral service, which took place under strict Covid-19 protocols, was held at the Sacred Heart Catholic Church in Ackerville Township in Emalahleni, Mpumalanga.

The death of minister in the presidency Jackson Mthembu has reminded South Africans that we have more in common than we would like to believe, ...
News
3 months ago

Ramaphosa said, “He (Mthembu) risked his life for the liberation of the country, he despaired as we stumbled and lost our way. It is the greatest tragedy to have lost him, particularly at this time as we strive to return to a path of integrity, of selfless service and of transformation.”

Mthembu was a voice of reason and great wisdom, who was gentle but could be firm when the occasion arose.

“He was faithful and loyal to both his organisation and his movement and to the people of our country. To his movement the ANC, he worked so hard on a daily basis to advance its causes.

“He worked very hard as well as the minister in the presidency and was also faithful to the constitution which he pledged to defend and protect. He was also faithful to his colleagues and to me as his president. But his greatest loyalty was reserved to this country and its people ...”

The nurse who treated the late minister in the Presidency Jackson Mthembu has detailed how doctors tried to resuscitate him in his very last moments ...
News
3 months ago

As a minister in the sixth administration, Mthembu executed his tasks with great commitment. “He was respectful and first in positioning government’s tasks of ensuring that there is accountability in the work that we do,” said Ramaphosa.

Mthembu was a man who flew the country’s flag high at an AU level as a Pan Africanist.

“We remember the intellectual force of his contribution of every structure that Jackson served in. We will miss the way he swayed, cajoled and persuaded us all us with his rich and booming voice, with his charming voice, his clever term of phrase, his wonderful sense of humour.” 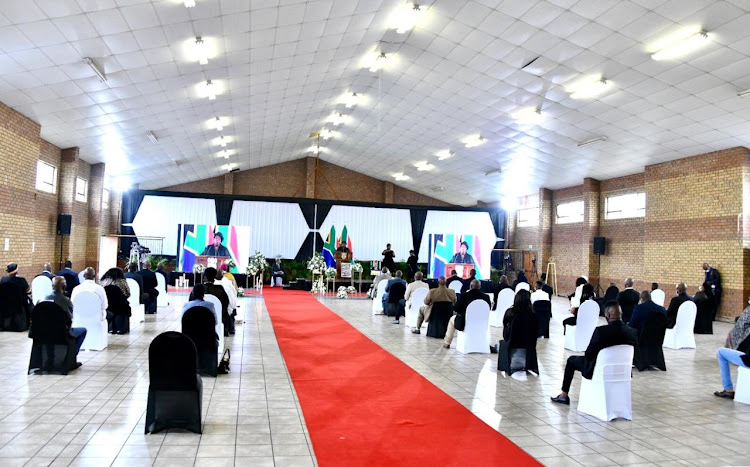 President Cyril Ramaphosa encouraged South Africans to follow in Jackson Mthembu’s footsteps by putting love of the country before self.
Image: SA Government/Twitter

Ramaphosa said the country may have lost Mthembu’s voice but his legacy lives on.

“He was a man of the people, he stood for them, he worked for the people and he measured his life by how loyally he served them. It is because he did not forget his roots, when he ascended to the ranks of high office, that is placed in their hearts, forever assured.”

Ramaphosa encouraged South Africans to follow in Mthembu’s footsteps by putting love of the country before self. “May we all stand on the side of right, not for the sake of expediency ... Jackson was one of our country’s heroes, our finest public servants and one of our greatest patriots.”

As the Last Post was sounded, the rain pouring over Mthembu’s grave, his wife along with other mourners wept for the man they will never see again.