Did Aggett really make a confession? If so, interrogator says he never saw it 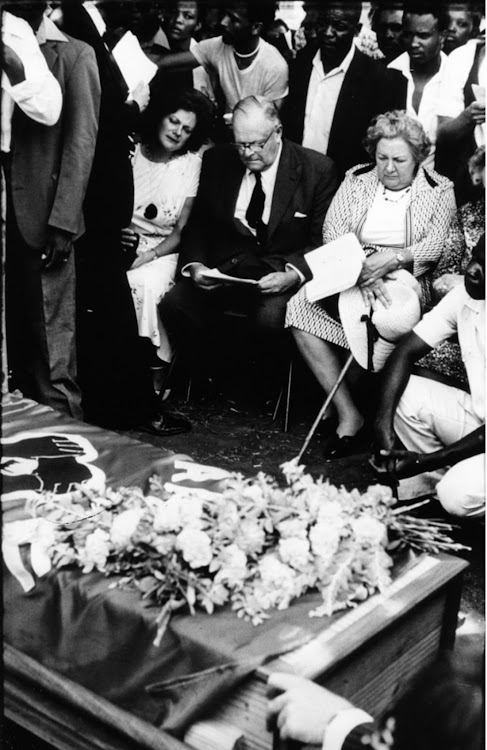 GRIEF Neil Aggett's parents Aubrey and Joy (since deceased) and sister Jill are joined by mourners at his 1982 funeral.
Image: James Soullier

An allegedly damning confession that pained Dr Neil Aggett so deeply that he ended up committing suicide has never been seen, leading to questions as to whether or he actually killed himself.

This is according to Brig Johan Naude, a former security branch cop who had interrogated Aggett at John Vorster Square police station in the 1980s. He was testifying in the Johannesburg High Court at the inquest into Aggett’s death.

Naude told the inquiry that he did not believe evidence from his colleague, Nick Deetlefs, that Aggett had committed suicide because of a damning statement he had made in which he allegedly outed his comrades.

Last year, Deetlefs testified that in his single session interrogation of Aggett, he had done what Naude and Stephan Whitehead had failed to do in three months — extract a four-page damning statement from Aggett.

Aggett had been arrested on suspicion of terrorism. He died in police custody in February 1982.

But Deetlefs last year refused to share the contents of that alleged confession, saying it involved the ANC and Sactu, and said it was “extremely sensitive”. This was the same stance he took during an inquest set up in the wake of Aggett's death.

Commenting on this, Naude agreed it was suspicious that this four-page statement — which reportedly left Aggett so pained and embarrassed, he would end up committing suicide — had never surfaced.

“I can agree the document never existed. As far as I am concerned, if the document existed, it should have been available,” he said.

In the fresh inquest, Deetlefs chose not to invoke his right to share the statement, even in-camera.

Under cross-examination by Howard Varney, representing the Aggett family, Naude said he believed Aggett was assaulted during that interrogation by Deetlefs. He said this was something he never did when he interrogated Aggett.

“To this day, I am convinced that if they granted me the opportunity to complete my statement, Dr Aggett would have been alive,” said Naude.

“There would have been no need to continue [interrogating him] if they accepted my statement ... All they had to do was accept the statement, whether they agreed with it or not, and see where it fitted [into the investigation].

“Someone in his wisdom decided my work was not properly done, that they were not happy with my statement. I don’t know how they ended up there, or who gave the instruction for Dr Aggett to go into stage two of interrogation. I don’t know what was wrong with my work,” he added.

Instead, Naude claimed, when he was vocal about not finding anything substantive to make the terrorism charges levelled against Aggett stick, he was gradually booted out of the investigation. Finally, he was sidelined.

Naude, who has for the last three days testified before the fresh inquest, has painted himself as one of the good cops, who, unlike his colleagues, never used extreme methods to extract information from suspects.

He said his interrogation of Aggett had been cordial, with them talking and laughing in between cigarettes — a stark contrast to the evidence given by previous apartheid detainees who spoke of the extreme torture they suffered at the hands of security branch officers.

Naude was on Wednesday confronted with the evidence of anti-apartheid activist Barbara Hogan, who claimed she was assaulted while she was in police custody.

Hogan had, back in the 1980s, deposed an affidavit alleging she was screamed at, threatened and beaten by interrogators who had intercepted a letter containing a list of ANC allies. The list, which was believed to be bound for ANC comrades in Botswana, had Aggett’s name on it, leading to his arrest.

Aggett was not an ANC member, but had sympathised with those in the struggle.

Naude said he never assaulted or threatened Hogan, nor witnessed her being assaulted on the day he was present for her interrogation. But he conceded that he could have “raised his voice” at her out of frustration.

“I never lifted a hand, nor threatened Ms Hogan. I may have raised my voice ... Had I been involved [in her assault], I would have applied for amnesty,” he said.

Naude had applied for, and been granted, amnesty for other unrelated charges which were before the Truth and Reconciliation Committee.

Hogan had testified of the horror she had endured at the hands of the police, adding she was sleep-deprived.

Naude, however, maintained when he took on the interrogation of Hogan, he had no idea she had been kept awake for hours, adding that she did not look exhausted.

“Did you ever use sleep deprivation as a form of torture?” Varney asked Naude.

Aggett was also a trade unionist who advocated for black workers’ rights.

While police and an 1982 inquest had found Aggett had committed suicide, this fresh inquest seeks to clarify whether there was any foul play from the police which had led to the medical doctor’s death.

The security branch police officer who took down statements made by Dr Neil Aggett before his death in 1982 on Tuesday said he never laid a hand on ...
News
1 year ago

Did Aggett really make a confession? If so, interrogator says he never saw it