'Dear Carl, you're on your own', Ace Magashule tells Niehaus as ANC moves to suspend him

Magashule distances himself from statements made by Niehaus 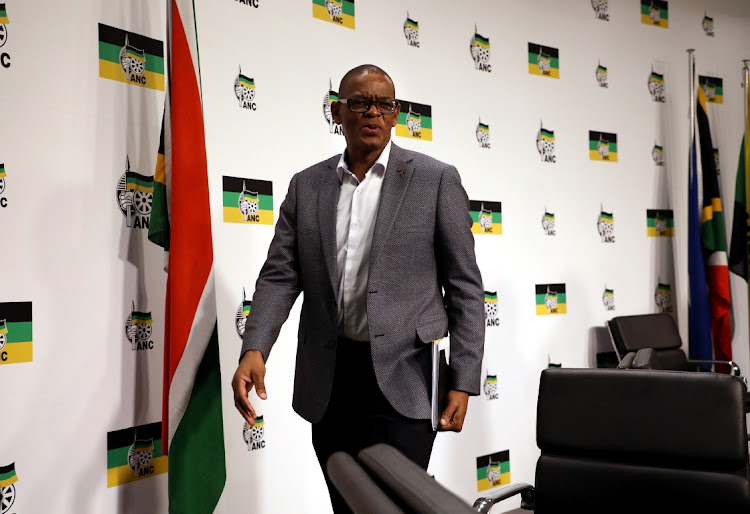 ANC secretary-general Ace Magashule has distanced himself from statements made by his loyal supporter Carl Niehaus.
Image: SANDILE NDLOVU

ANC secretary-general Ace Magashule has distanced himself from statements made by one of his loyal supporters - Umkhonto we Sizwe Military Veterans' Association spokesperson Carl Niehaus.

Niehaus was on Tuesday informed that there was an intention to place him on suspension from his position in the ANC office of the secretary-general and could possibly face disciplinary action for launching a personal attack on the party’s’ deputy secretary-general, Jessie Duarte.

“I have observed, with concern, that you are involved in activities that create the impression that you act on instructions from me. I wish to distance myself from your remarks regarding the NEC in which I am a member,” said Magashule.

He went on to say the need for the radical transformation of the economy was an important resolution of the ANC.

“These resolutions bind and commit all members and structures of the ANC. They are not, and cannot be allowed to be perceived as, the domination of ‘RET Forces’ or any other grouping or faction.

“Any attempt to create such an impression is wrong, creates disunity within the ANC, and as such must be repudiated. Accordingly, I distance myself from any and all activities which cause disunity in my name.”

Meanwhile, Niehaus would not be drawn on commenting on the matter.

“Lol. I do not comment to leaked letters,” he said on Tuesday morning when asked to comment on the letter informing him that he could be suspended for violating the party’s policy.

When pressed further on the knowledge of the letter he said, “Hey stop it. I am not commenting.”

In the letter intending to suspend him, dated 19 January, ANC’s general manager FC Potgieter-Gqubule tells Niehaus that, “You have been advised, on more than one occasion, that your public statements and social media posts, are unbecoming of someone working in this high office, which has the primary responsibility of driving and coordinating the work of all structures of the ANC. You also received a written warning to this effect, on October 12 2019.

“The latest statement titled 'Personal Statement by Carl Niehaus about his ongoing Recovery from Covid-19 Pneumonia' dated Thursday January 14 2021 (attached), crosses all boundaries expected from an ANC employee, and particularly someone of your seniority.

“In particular, the personal attack on the ANC deputy secretary-general in this statement is a serious violation of the ANC Personnel Policy Manual. ANC staff members are expected to abide by the discipline of the organisation, and personal attacks by a member of staff on elected leadership – without even attempting to address the matter internally – is unprofessional, is not tolerated and is in violation of the manual.”

Niehaus has to respond within 48 hours of receiving the ANC’s letter.

He also has to tell the ruling party why he should not be suspended on full pay pending the institution of disciplinary action for his conduct.

The letter which landed Niehaus in hot water is dated 14 January.

In it he said, “It is sad that some in our society have become so hate-ﬁlled, and vicious, that one cannot even hope at a time of grave illness, for support and sympathy. During the time while I was ﬁghting for my life I was deliberately targeted by a well-coordinated aggressive propaganda smear campaign against me in the... media. These attacks are still continuing unabated.

“I am saddened that even the deputy secretary-general of the ANC, comrade Jessie Duarte, saw it ﬁt to attack me, and undermine my long history as a 42-year veteran of the ANC in good standing, as well as my elected position as an NEC member of MKMVA, and MKMVA national spokesperson. This she did, knowing that when she was doing so, I was gravely ill. It was unnecessary and callous - I am deeply saddened by it.”

ANC spokesperson Pule Mabe asked TimesLIVE to send him questions in writing. He had not responded by the time of publishing.

Umkhonto we Sizwe Military Veterans Association spokesperson Carl Niehaus has declined to comment on his suspension from the ANC after he attacked ...
News
1 year ago
Next Article