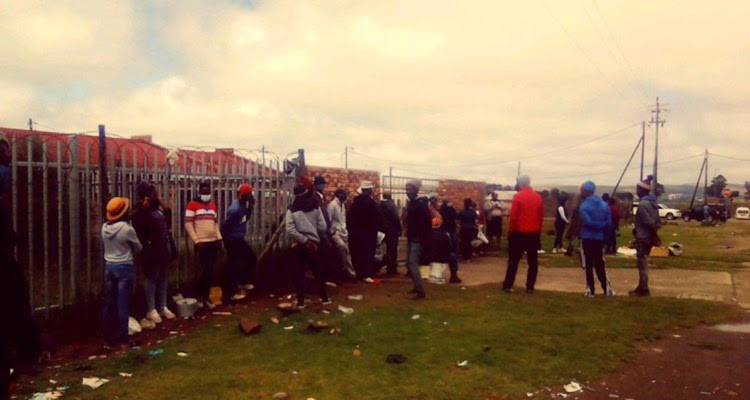 A R120 chunk of the R350 Nomangesi Ndwayana and Nandile Ngemntu will each receive from the Covid-19 social relief of distress grant will go to pay the driver who brought them 50km from Peddie to Makhanda in the Eastern Cape to queue outside the post office.

The two travelled 50km from their Peddie village, arriving at 3am, only to find people already queuing.

“We do have a post office in Peddie town,” said Ndwayana. “But the challenge is that all the people from the rural villages [118 villages according to the Ngqushwa municipality website] here are served by one post office. You can just imagine all those villages coming together to a single post office. That is the reason we decided to come to Grahamstown [Makhanda] because they have a few post offices here to assist people.”

Ngemntu said they had to hire a car. “Now we have to pay the owner of the car from the R350 that we are going to get here. The sad part is when the offices close and you have not received help and you have to come back again, keeping in mind that we are hiring a car with the same R350. This is all because of being unemployed,” said Ngemntu. The return journey to their village costs them each R120.

Ngemntu said that following Covid-19 regulations is not possible in the queue. “Even in Peddie it is the same story as here. People do not care and some are not even wearing their masks.”

Queues outside the Joza Post Office and the Market Square Post Office in Makhanda centre had already formed early on Wednesday. People had brought buckets and small chairs to sit on and were waiting patiently for the offices to open.

Ntobeko Jela, who has been unemployed for five years, said he arrived at the Joza Post Office at 4am. He said he came early because he knows people sleep outside the office. “I need to wake up early to take a spot,” he said.

“I know that there is no social distancing and that is something we cannot help. We don’t know who is Covid-19 positive and who is not but we just want the money because we are hungry and without food back at home. I live with my mother and we both depend on this R350 grant,” said Jela.

Nolulamile Mesani said she asked her 16-year-old granddaughter to accompany her at 5.30am. “I can’t walk all the way from Tantyi to here alone in the early hours. I’m old and she is young and we are both vulnerable to thugs. But there is no other way because we don’t have food back at home. We desperately need this R350 as it is going to make a difference,” she said.

Eastern Cape health department spokesperson Sizwe Kupelo said that the fight against this virus would be won only if people in communities adhered to the regulations. “We urge people to realise the danger of the coronavirus and follow all the non-pharmaceutical methods. This virus battle will be won in communities and not in hospitals.”

Eastern Cape Sassa spokesperson Luzuko Qina said the spike in Covid-19 and a move to an adjusted level 3 had affected services by several institutions, including Sassa.

“Sassa has requested its beneficiaries to use various platforms to receive their R350 grants, namely bank accounts, money transfer through mobile phones, and cash from post offices. However, given the nature of these clients, the poorest of the poor, who either do not have bank accounts nor smartphones, these platforms became just impossible to use. Thus they would rather collect from post offices,” said Qina.

He said the post office had capacity challenges and as a result Sassa had introduced a booking system through SMS and tickets. “The spike of the pandemic is a concern to us and we request our clients to please adhere to the regulations and only come collect their money at post offices after receiving an SMS or on the day allocated as per the booking ticket. We will continue paying even beyond January 31 with outstanding payments,” said Qina.

This article was first published on GroundUp.

However, the agency's CEO Busisiwe Memela says the claims are untrue - it is simply cutting off payments to people whose disabilities were temporary.
News
5 months ago

Sassa said appellants must be individuals who applied between November and January 2021.
News
6 months ago
Next Article