Covid patient was in coma during birth 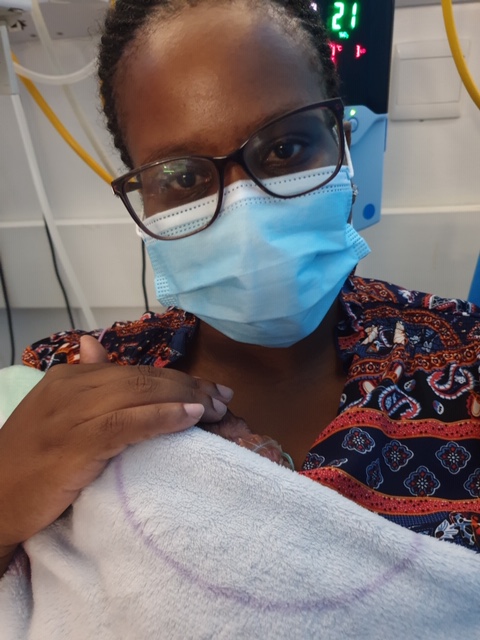 Nosipho Nkantini holds her son, Oyena, for the first time weeks after he was born prematurely by emergency caesarean while his mother was unconscious on ventilator support and fighting for her life due to Covid-19.
Image: Netcare N1 City Hospital

It was a new year miracle for Nosipho Nkantini after the newborn baby she feared was dead turned out to be alive.

The new mother from Eerste River in Cape Town developed Covid-19 symptoms in mid-December when she was only five months pregnant. She was hospitalised after experiencing shortness of breath and later lost consciousness. When she woke up days later a C-section had been performed on her for the birth of her 25-week-old premature baby on December 17. The baby continued to fight for its life in the neonatal intensive care unit.

"When I woke up days later I was too scared to even ask where my baby was, but the nurses told me he was alive. I was not able to see him because I had Covid-19, then I was discharged and spent a whole week with no contact from the hospital because they had my old contact information," she said.

Nkantini, 40, said when she heard no word from the hospital she believed her baby had died and spent Christmas in despair.

"I had already lost another baby in January of 2020 after it was born at only 28 weeks. So when this one was delivered at 25 weeks I thought there was no hope," she said.

Nkantini, who is also a professional nurse, said the police eventually tracked her down.

“When the police arrived at my home, I thought they were coming to tell me that my baby had died. I could not believe it when they told me my baby boy is fine and he is waiting for me in the hospital. It was such a big relief, and afterwards the police said, ‘we didn’t mean to scare you’.”

She finally met her baby three weeks after he was born on January 4. Nkantini has once only held baby Oyena whose name means "the one chosen by God".

"He is still doing good and growing well. His feeding tube was also removed, hopefully I can take him home at the end of February," she said.

Dr Ricky Dippenaar, a neonatologist at Netcare N1 City Hospital where Oyena was born, said it was not uncommon for Covid-19 positive mothers of premature babies in intensive care to feel a double separation from their babies.

“Double separation is when the mother cannot hold her baby and can no longer feel the baby inside her. Psychologically this is very tough, and in this case, it was further compounded by the mother’s history and traumatic Covid-19 experience," said Dippenaar.