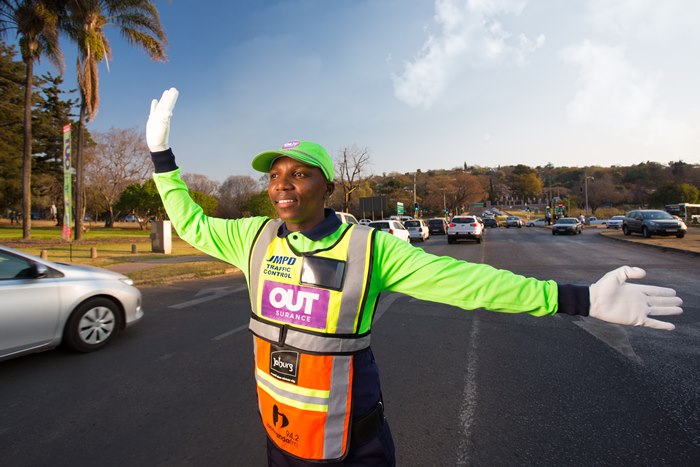 The City of Joburg has finalised an agreement with Traffic Freeflow, a company responsible for the deployment of pointsmen in the city. File photo.
Image: Supplied

About 100 OUTsurance pointsmen are back on Johannesburg’s roads after a new agreement was reached between Traffic Freeflow, a company responsible for the deployment of pointsmen, and the City of Johannesburg.

The pointsmen, popularly known as “OUTsurance pointsmen”, have been an inconvenient absence on our roads since September 2019, when a contract between the city and Traffic Freeflow was not renewed.

The city said its decision not to renew the contract was as a result of the Johannesburg metropolitan police department’s (JMPD) upgraded functions and the appointment of an additional 180 traffic wardens who were to replace the pointsmen.

When taking office in December 2019, mayor Geoff Makhubo directed that the city move swiftly to finalise new agreements with the service providers on terms that would guarantee the services at zero cost to the city and the creation of job opportunities for the hundreds of young people who are trained to provide these services.

“We are pleased the JMPD trained 40 pointsmen last month. From January 11 2021, they took up duty alongside an additional 60 pointsmen who were part of the programme previously,” Makhubo said.

“We urge residents to show the pointsmen courtesy and to co-operate with their instructions on our roads. They are there to assist with the smooth flow of traffic and to ensure we are safe on the roads at all times.

“We are beginning to see the fruits of our efforts to normalise the city after the disruption of the past four years.”

The pointsmen have been deployed to regions throughout the city from Monday, and over the next while there will be increased deployment of the static and mobile pointsmen.

The nearly 200 insurance-sponsored traffic pointsmen who keep Johannesburg traffic moving will keep their jobs - for now.
News
3 years ago

Nearly 200 traffic pointsmen who have kept Johannesburg traffic flowing for the past 13 years are set to lose their jobs.
News
3 years ago
Next Article