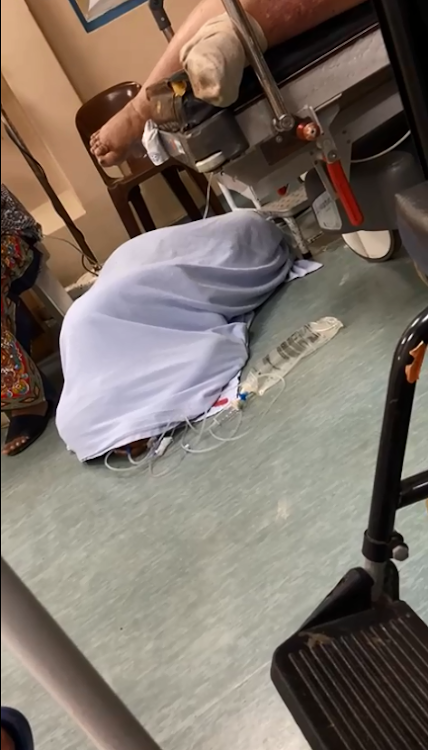 A screengrab from a video showing patients sleeping on the floor and on chairs at Wentworth Hospital.
Image: Screengrab

The KwaZulu-Natal health department has attributed staff absenteeism and the high number of patients who turned up at Wentworth Hospital after a video showed what appeared to be a lack of care for patients.

The video started circulating at the weekend, showing patients sleeping on the floor, unattended, or in chairs - while one woman screams for help, saying she cannot breathe. In the video, which is about 90 seconds long, no staff members are seen responding to or attending to the woman. It is unclear who took the video.

The department said it immediately dispatched a high-level delegation of managers from its head office after becoming aware of the video.

During the visit, the department said it was established that the patients who were filmed were awaiting their Covid–19 results, saying they were known as patients under investigation (PUIs).

“On the day in question, the hospital had received a particularly high number of patients. Additionally, 11 doctors were away in isolation, after testing positive. A further 17 nursing staff were off due to Covid-19. Six nurses were in charge of the accidents and emergency unit, as well as a 28–bedded short-stay ward with very sick patients,” the department explained in a statement.

It has, however, condemned the filming and distribution of video footage of any patients within the care of the department, without official authorisation and the patients’ permission.

“This is indecent and tantamount to the violation of patients’ inalienable right to privacy and dignity,” the department said.

A private hospital in Durban was raided by the police and the SA Health Products Regulatory Authority on Thursday following a tip-off that the ...
News
1 year ago

The department said the delegation has assisted the hospital to ensure that patient flow is managed properly, through the following interventions:

The department also said it believes the availability of Covid-19 rapid tests will reduce the time spent by patients awaiting their results.

“We sincerely appreciate the profoundly good work that is being done by our tireless front-line workers, and staff across the board, to help the province square up to this pandemic,” the department said.

Meanwhile, the DA has called on health MEC Nomagugu Simelane-Zulu and her head of department Dr Sandile Tshabalala to conduct an urgent investigation into the video.

“The DA is horrified by this video. While we understand that KZN’s health-care system is extremely stretched, the conditions and lack of patient care are completely unacceptable, inhumane and possibly unconstitutional. Section 27 of the constitution confirms the right to access proper health care,” the DA said.

The party blamed the situation at health-care institutions on what it referred to as years of mismanagement, further exacerbated by the second wave of the pandemic.

“What we are now seeing is a historical shortage of vital clinical staff through frozen posts combined with health-care workers who are becoming infected, being placed in quarantine and, sadly, some passing away. This immense strain is now having a huge impact on patient care in facilities, as seen in this video,” the DA said.

The party said it has also called for more oversight from KZN’s health portfolio members.

The DA said if it does not see urgent intervention by the department, it will escalate the matter to the KZN health ombudsman for investigation.

Six patients died when their oxygen supply was interrupted at Shifa Private Hospital on Saturday.
News
1 year ago

Seven people were killed after a collision between a truck, a Kombi and a Pajero on the N3, Harrismith, on Sunday evening.
News
1 year ago
Next Article