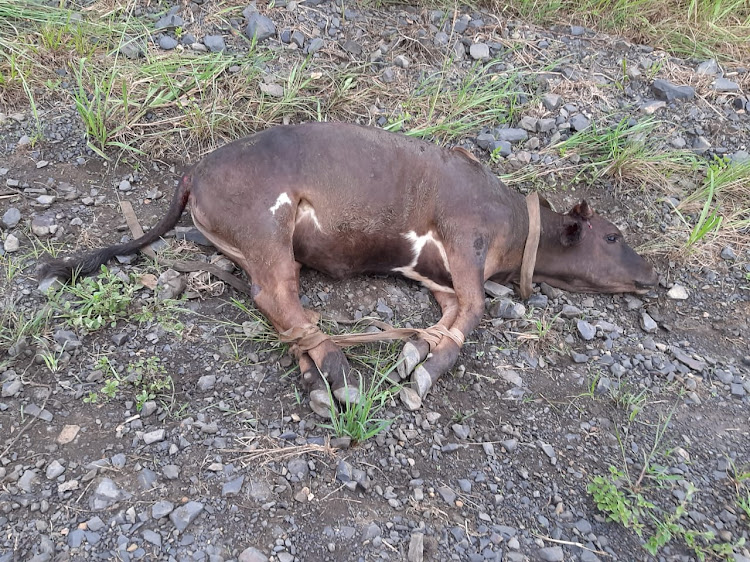 One of the cows that were flung out of a moving taxi in KwaZulu-Natal on Thursday
Image: Supplied

Three cows were thrown out of a moving taxi as stock thieves fled from police near New Hanover in the KwaZulu-Natal Midlands on Thursday.

Police spokesperson Capt Nqobile Gwala said the K9 unit was conducting an operation in Pietermaritzburg when it was informed about a Toyota Quantum travelling with four stolen cattle in the Karkloof area.

“With the assistance of other law enforcement agencies, the vehicle was pursued.

“During the chase, the suspects proceeded on a gravel road towards New Hanover. In an attempt to evade police, the suspects threw three cows out of the moving taxi,” said Gwala.

The men lost control of the taxi and crashed into nearby farm hostels.

Gwala said they fled the scene on foot.

“Investigations on the scene revealed that the livestock were stolen in the Rietvlei area.

“A charge of animal cruelty will also be added,” she said.

Police are continuing their search for the men.

In the last three months, more than 26,000 sheep were stolen in the country, police minister Bheki Cele said on Friday.
News
6 months ago

Police have identified five groups behind numerous stock theft incidents in the crime-ridden farming community of Paul Roux and surrounding areas in ...
News
6 months ago

Police minister Bheki Cele wants better auditing of livestock and has vowed to crack the whip on crooked cops during a crime imbizo with farmers in ...
News
6 months ago
Next Article