As second wave builds, funerals mount and coffins are in short supply 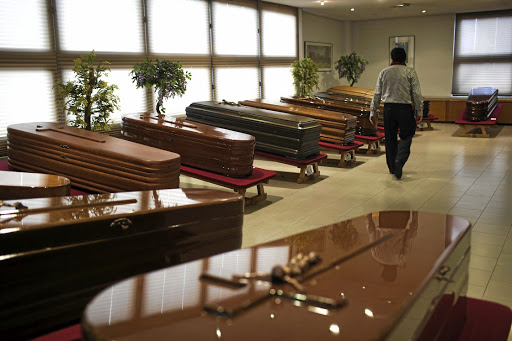 Officials and funeral parlours are encouraging weekday funerals to take the pressure off weekends.
Image: Angel Navarrete/Bloomberg via Getty Images

As Covid-19 deaths mount, some undertakers are already experiencing a shortage of coffins.

Deputy president of the National Funeral Directors' Association (NFDA), Dr Lawrence Konyana, said some of their members in the Eastern Cape had reported a shortage of coffins. According to Konyana, this is because of a  spike in deaths in the province, made worse by the closure of some manufacturers during the festive season.

Konyana said the spike in funerals was noticed in the Eastern Cape, Western Cape and KwaZulu-Natal, but he added that Gauteng was now starting to catch up.

“Over the past two weeks we saw an increase in funerals in Gauteng — and the number keeps going up,” he said. Konyana said that in the coming weeks they predicted the turnaround time for burials being problematic as municipalities might not be able to prepare graves at the required speed.

He said most private hospitals were encouraging families of the dead to fetch their bodies as soon as possible to free up their mortuaries, which can’t hold a lot of bodies.

“Once a person dies, the family is asked to fetch the body immediately. We are slowly seeing this also happening in some of the public hospitals, so capacity might be a challenge there too,” Konyana said.

The MD for Doves Funeral Services, Jodene Smith, said they were already seeing an increase in funerals in coastal provinces.

“Our members are seeing an increase of nearly 80%. We also have more funerals during the week that we did before,” she told SowetanLIVE sister publication TimesLIVE.

Tough times lie ahead for South Africans as the  number of daily Covid-19 infections has spiked sharply over the past week raising expectations that ...
News
1 year ago

According to Smith, KZN is holding 30% more funerals during the week than they did pre-Covid. Smith said undertakers were experiencing delays at government mortuaries when fetching bodies because of protocols around the handling of Covid-19 bodies.

“The process of fetching a body takes a maximum of 20 minutes under normal circumstance. Now we spend more than an hour to fetch just one body because of protocols,” she said, adding that queues at government mortuaries were also long.

With the increase in deaths, Smith said it would help to have home affairs services open on weekends to help with the registration of deaths. She said that would ease the load of undertakers.

On the capacity to hold bodies, Smith said they had measures in place during the first stage of the pandemic.

“We have enough personnel. We do have a pool of casual workers who are now on call regularly because of the increase in funerals,” she said.

General manager of Avbob Funeral Services, Pieter van der Westhuizen, said that during December the number of funerals they performed in the Eastern Cape increased by 120%, by 84% in KZN and by 60% in the Western Cape.

However, he was reluctant to attribute Avbob's sharp rise in business exclusively to  Covid-19.

“I cannot honestly say that the increase is definitely because of Covid-19,” he said.

Van der Westhuizen said the South African Medical Research Council's weekly stats on excess deaths were more in line with what they were seeing, as opposed to the Department of Health's statistics. He said their branches across the country are coping, despite being under pressure.

“We dealt with this during July, at the first peak, so at that stage we brought in 19 refrigeration containers to deal with the additional bodies that we could not store in our mortuaries.”

He expected branches in north Gauteng and Limpopo would be inundated soon. The company had extended its office hours in Durban to 10pm and in East London to 8.30pm due to demand.

“We have also pushed a number of funerals into the week to clear up our morgues. We're trying to get our customers to not only bury over the weekend but to bury during the week as well.”

Speaking to the media during a virtual briefing last week, KZN health MEC Nomagugu Simelane-Zulu disputed reports that state mortuaries in the province were running out of space.

“As far as we are concerned there is no area where we have run out of space.”

She said she could not provide insight as to why KZN was hit so hard by the second wave.

“We don't have a scientific response just yet but the minister and his team are working on it,” she said.

The Western Cape has begun importing oxygen from outside the province to help deal with the peak of its Covid-19 epidemic, provincial head of health ...
News
1 year ago

A video of grave diggers preparing seven burial sites at a Durban Muslim cemetery for people who lost their lives as a result of Covid-19 is a grim ...
News
1 year ago

As second wave builds, funerals mount and coffins are in short supply

As Covid-19 deaths mount, some undertakers are already experiencing a shortage of coffins.
News
1 year ago
Next Article