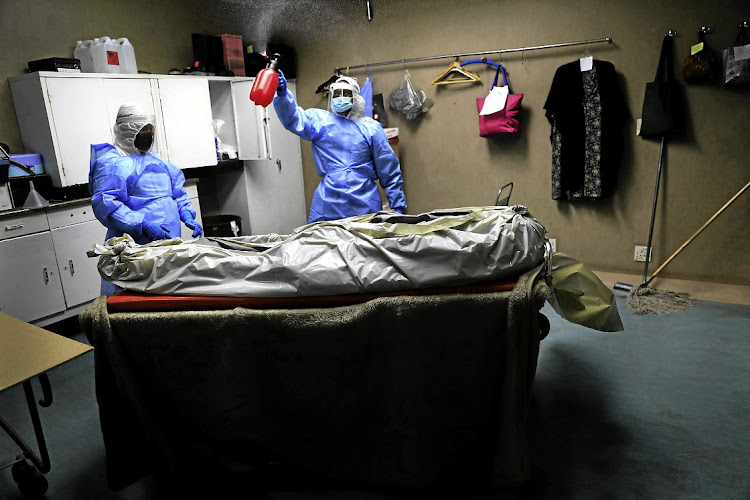 A cadaver in a body bag is steralised in the embalming room of a Johannesburg funeral parlour during the Covid-19 pandemic.
Image: Alon Skuy/ Sunday Times

The country reported a record 17,710 daily increase in coronavirus infections on Wednesday, surpassing the previous high of about 14,500 set several days ago.

"As of today, the cumulative total of Covid-19 cases identified is 1,039,161 with 17,710 (positivity rate 33%) cases identified since the last report," the health ministry said in a statement.

The positivity rate is the percentage of people testing positive of total people tested.

"The positivity rate, being an indicator of the rapidity of spread, remains of major concern," the ministry said.

South Africa, which has the highest number of cases on the continent, has been battling a major surge in coronavirus cases since the end of November, owing largely to a new strain of a virus called 501.V2, the government has said.

This has put a severe strain on hospitals with some medical facilities overflowing with patients, prompting the government to impose stricter lockdown measures.

The number of deaths a day has risen to an average of nearly 500 in the past few days, with the total death toll at more than 28,000.

Advocate Muzi Sikhakhane is receiving treatment in hospital for Covid-19.
News
5 months ago

On the day government pleaded with grieving families to social distance at funerals to avoid superspreader events, another 497 people were reported ...
News
5 months ago
Next Article