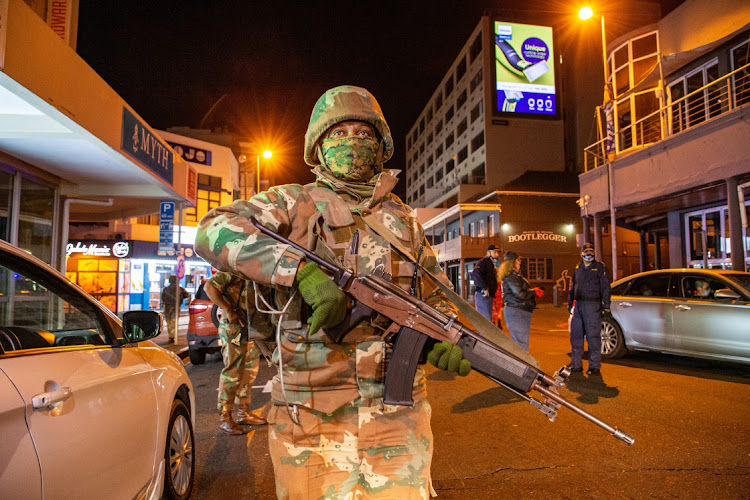 Soldiers patrol in Sea Point in Cape Town on July 24 2020. The national and Western Cape governments have called for the military to help enforce the new level 3 lockdown regulations.
Image: GALLO IMAGES/ROGER SEDRES

Both the national and Western Cape governments are seeking the assistance of the  military in the fight against the Covid-19 pandemic.

Police minister Bheki Cele said at a media briefing on Tuesday regarding the new lockdown regulations under level 3 that discussions are underway for members of the defence force to assist with enforcement.

Enhanced enforcement will be required because of the 9pm to 6am curfew; the ban on the sale, distribution and transportation of alcohol; the prohibition on social gatherings; the prohibition on entering public parks and beaches in hotspot provinces; the closure of nightclubs, bars, shebeens and taverns; and the legal requirement to wear a mask in public places.

Police minister Bheki Cele said he is impressed with the level of discipline shown by uMhlathuze residents under level 3 in the northern ...
News
1 year ago

Cele said he had spoken to defence minister Nosiviwe Mapisa-Nqakula about using the military where police needed extra assistance.

Violence against citizens by soldiers during the start of the lockdown was controversial and widely condemned.

Head of the Western Cape health department Keith Cloete said at premier Alan Winde’s weekly digicon to provide an update on the province’s response to the pandemic that a request had been made for defence force assistance in terms of health-care staff, hospital and transport capacity, as well as additional capacity for law enforcement.

A formal request has been submitted through the provincial joint operational and intelligence structure and will be served through the national structure later in the day, with a response expected either on Tuesday or Wednesday.

“We expect a good response,” he said.