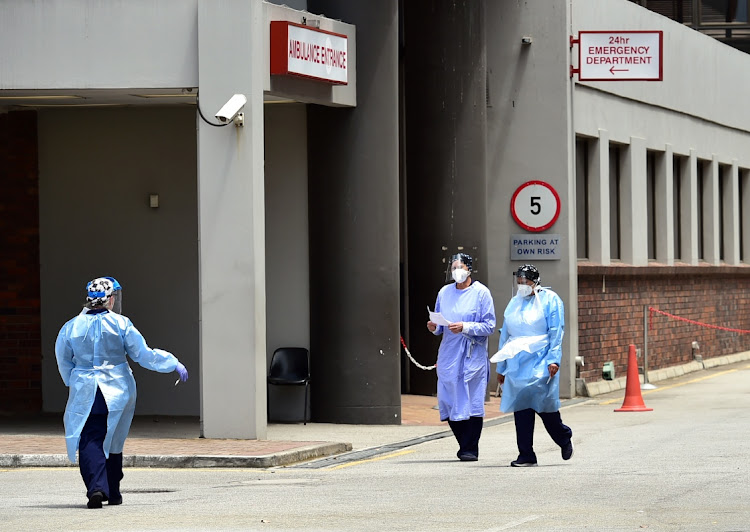 Western Cape health workers are exhausted by the burden of Covid-19 cases and are experiencing high rates of infection themselves.

The province has 761 active infections among health workers, with 68 in hospital and five mortalities in the past fortnight, head of health Dr Keith Cloete said on Tuesday. Ninety-four health institutions have infected staff.

Cloete said the province was experiencing a distinct second wave that was significantly higher than the first wave, with increases  in oxygen use, hospitalisations, deaths and positive tests.

“We see figures way above what we saw in June,” Cloete told premier Alan Winde's weekly media briefing on Covid-19.

“We've seen sharp increases in every geographic area in the [Cape Town] metro except in Khayelitsha, which hasn’t exceeded the first peak.”

Since the beginning of March, more than 7,000 staff — about a  third of the provincial total — had taken Covid-19 related leave that totalled about 36,000 days or five days per case.

“The more Covid-19 increases, the more health-care workers are away from the workplace because of infection to themselves,” said Cloete.

If you cannot do it for yourself, just do it for health-care workers. Some of them won't even be able to spend Christmas with their families because they'll be working hard in order to protect you.

Health MEC Nomafrench Mbombo said the department had to prioritise the wellbeing of its staff.

“The beds need faces, and faces need hearts, and the hearts need the hands. But now they are exhausted. While some of us had been afforded an opportunity to stay home, health-care workers never stayed home. They've been there since March,” she said.

It was vital that citizens played their part by wearing masks and staying away from crowds so health-care workers, who are the last line of defence, could be spared.

“If you cannot do it for yourself, just do it for health workers. Some of them won't even be able to spend Christmas with their families because they'll be working hard to protect you,” she said.

Cloete said provincial authorities were confident that the new Covid-19 variant spreads faster than other variants, explaining the resurgence of infections along the Garden Route.

“The reason it spreads faster is that it binds with the human cell easier. That means that you need smaller amounts of the vector of the virus to become infected,” he said.

There may be no choice but to tighten lockdown regulations unless people adhere to social distancing and health protocols as Covid-19 cases spread ...
News
1 year ago

The department of health issued a lengthy list of questions and answers on Saturday after announcing that the virus that causes Covid-19 has evolved ...
News
1 year ago

There are 2,691 Covid-19 patients in public-sector acute hospitals in the Western Cape and 1,110 in private hospitals.

The province’s biggest field hospital, Brackengate in Brackenfell, has 282 patients and is operating at maximum capacity. Daily oxygen utilisation is running at 58%.

The province's biggest hospital, Tygerberg, is at 98% capacity and Groote Schuur Hospital is at 97%.

We need a radical intervention here of changing something that can safeguard the health-care platform.

Cloete said the private hospitals in the province are also under pressure, with 300 patients in ICU, 50% more than at the peak of the first wave.

“We are now starting to exceed the hospitalisation rate in the first wave and it is still increasing — and we expect it to increase over the next two weeks,” he said.

“And that is the big message we bring to you today. The health-care platform in Cape Town is already under pressure. We expect it to become under even more pressure. That's why we need a radical intervention here of changing something that can safeguard the platform both for the public and the private sector over the festive season in Cape Town.”

Winde said everyone joining a gathering over the festive season should ensure the gatherings are small and held outside.

“Let's keep them within one bubble, or at the very most have two bubbles together. We all know what to do,” he said.

“Let's all play our part over the next two weeks during this festive season so that we can give those health workers our love and support during this time, knowing that we are playing our part in this deal, knowing that they know that we care about them and understand the kind of pressure that they're under.”