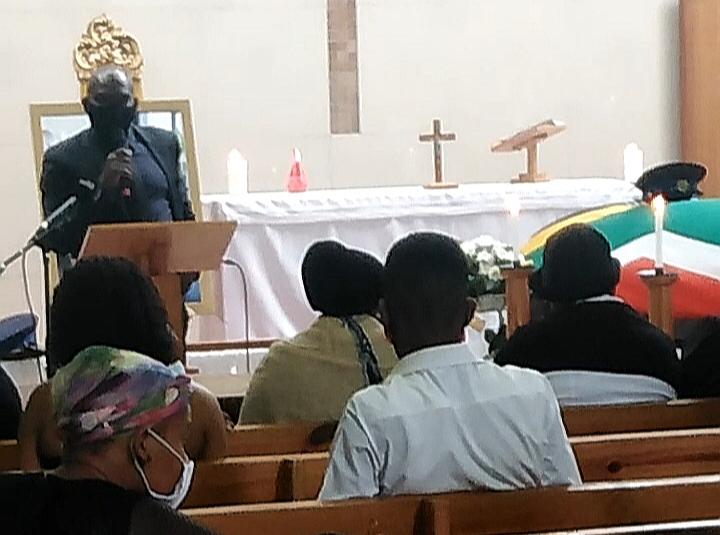 Police minister Bheki Cele told mourners in KwaNdengezi that he wished Capt Thulani Molefe, who died in a hail of bullets, could have been spared to spend Christmas with his family.

Cele was speaking at a memorial service in the township outside Durban on Tuesday, and  expressed regret about police officers who were recently shot in the province.

A fellow member in blue, an off-duty police officer stationed with the Empangeni Tactical Response Team (TRT) who recently sustained multiple gunshot wounds, is fighting for his life.

Cele said the ministry is “devastated” by the alarming rise in attacks and killing of police officers, especially in KwaZulu-Natal.

“The officer who is part of the TRT was attacked for no reason. The suspects were apprehended by law enforcement officials in Melmoth. I would have liked to have seen the same outcome with Molefe.

"Molefe was attacked by three suspects. One of them is in the morgue. After the tragic incident, I am pleased we were able to track down the suspect. He opened fire on police officers again, but this time he ended up on the ground."

Molefe was shot and killed in his vehicle while on his way to work on the morning of December 14.

Described as a quiet man, the father of three served in the police force for 35 years after joining at the age of 24.

Molefe's eldest daughter, Polite, described her father as a humble and honest person who always wore a smile with his police uniform.

“Even if you stepped on his toe, his reaction would be to laugh it off. You couldn't upset him. He loved his job. This is a man who would often leave the house in pyjamas when duty called at night," she told the gathering at the Anglican Church.

KwaNdengezi Community Police Forum chairperson Xolani Mkhize said his friend was a man of “love and peace” who did not deserve to lose his life so tragically.

"Thulani was calm. I met him in 2013 and we clicked and instantly became pals. May you rest in peace, brother. You deserved better".

Cele thanked the Molefe family, and reminded mourners that South Africans must know police have an obligation to uphold the law and protect the public, just like Molefe did.

“As soon as you pick up the cross and commit to this job, you commit to war. We lie down here because we are fighting evil," he said.

Hendrick Tsietsi Monene was the first of 44 people killed in weeklong violence Marikana, and his family believe the wrong man is being tried for his ...
News
10 months ago

The police have announced a R100,000 reward for assistance that will lead to the arrest of the killers of a policeman in the ganglands of the Western ...
News
10 months ago

Police watchdog Ipid is investigating the death of a KwaZulu-Natal man who was allegedly shot by an officer who believed he was in a relationship ...
News
11 months ago
Next Article