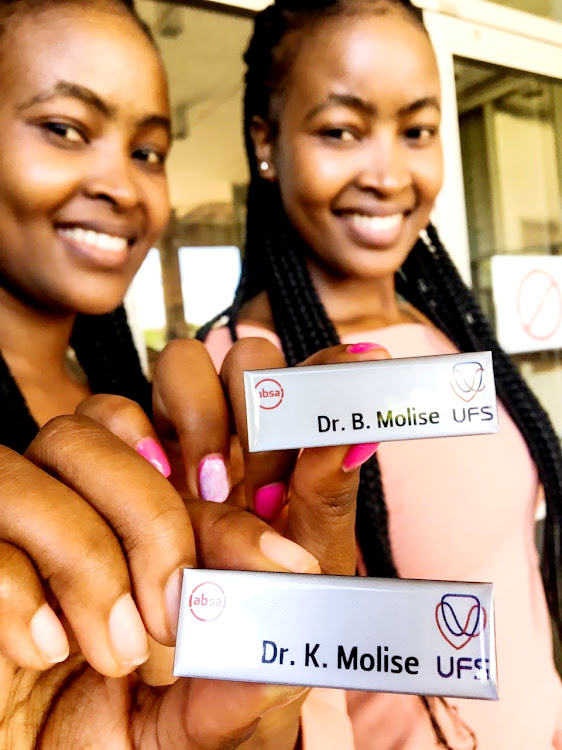 Keitumetsi and Boitumelo Molise, twins from Botshabelo, have become social media sensations after a photo of their graduation from the University of the Free State went viral.

The photo was posted by their sister with the caption: "God has done it again!! My baby twin sisters made it, they are Doctors y’all"

The post was shared by more than 4,000 users on the social media platform.

Speaking to SowetanLIVE, the duo said the reason they chose to pursue medicine was inspired by their grandfather, who had cancer and was placed under palliative care.

“It was a major factor that influenced our decision. It was very difficult to see him in the last stage of his life knowing that there is nothing we could do” said Keitumetsi.

Keitumetsi added that that made them realise that everyone deserved standard health treatment, whether it comes from private or public hospital.

Boitumelo says that while they have been doing everything together from high school to university, their passions in medical sciences differ .

“I am naturally in love with gynecology, I never spent a lot time studying and I got a distinction, so I am definitely aiming to specialise in it “ said Boitumelo.

Keitumetsi, on the other side,  says that she is addicted to the adrenaline rush of being in the theatre.

“ I love being in the theatre, I am specifically in love with the rush that comes with being there. I love anesthesiology”, said Keitumetsi.

The twins say  they have been inseparable since they were young, shared the same friends and also did the same hairstyles.

They were roommates and study partners for the entire 5 years that they have been studying towards their medical degree.

“We would always compete with each other with marks but my sister Keitumetsi always had the highest marks, ” said Boitumelo.

The twins have also secured internships for the coming year and are ready to take on the world.