Hotels and restaurants stay open but beach ban is total 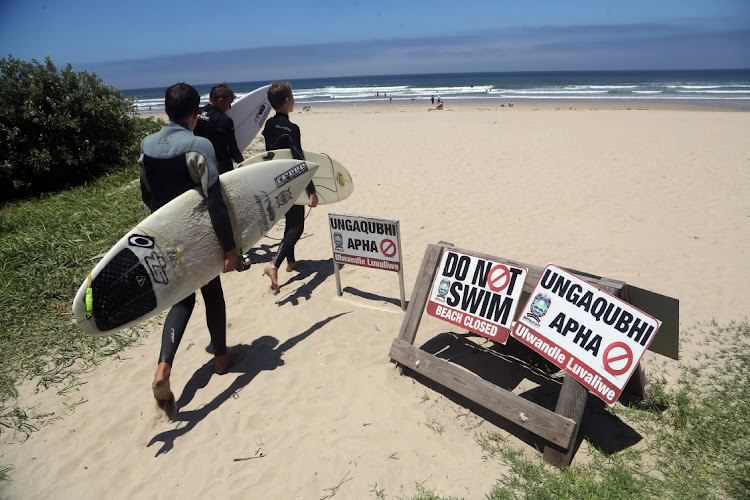 Buffalo City mayor Xola Pakati is not 100% sure why the metro has not been declared a Covid-19 hotspot, but he suspects it has to do with fatality numbers being lower than in Eastern Cape districts where severe restrictions have been put in place.

He has also shed light on why a blanket beach ban has been imposed on Eastern Cape beaches, whereas in KwaZulu-Natal only popular beachgoing days like Christmas Day and New Year’s Day have been outlawed.

Quite simply, there is not enough staff in the Eastern Cape to police the province’s beaches.

In the hours following President Cyril Ramaphosa’s address on Monday night, many in Buffalo City Metro and other parts of the Eastern Cape were mystified as to why the metro had escaped the fate of Nelson Mandela Bay and the Sarah Baartman district.

Only hours earlier on Monday, the BCM Covid-19 command centre had confirmed the metro was leading the way in new Covid-19 infections.

Figures issued by the provincial government earlier this week showed 2,026 deaths in Nelson Mandela Metro as of December 12. In BCM there were 1,137 deaths by the same date.

The number of fatalities in Sarah Baartman stood at 403 this week, but its population is much smaller.

Buffalo City mayor Xola Pakati is not 100% sure why the metro has not been declared a Covid-19 hotspot, but he suspects it has to do with fatality ...
News
1 year ago

Asked by DispatchLIVE on Tuesday why BCM had not been declared a Covid hotspot, Pakati said he did not know for sure, but  the lower fatalities could be the reason.

“What I can confirm is that infection numbers are escalating, but we have not yet experienced the high levels of deaths, as is the case in those places that had been declared hotspots. However, I appreciate that the president has taken a view that the beaches be closed,” he said.

“For quite some time we have been worried about the conduct of our people at metro and provincial beaches, in particular when it comes to non-adherence to the rule of wearing a mask.”

Asked why BCM and other coastal municipalities had not requested the national coronavirus command council to limit the beach ban to certain days, Pakati said: “The problem is that we do not have enough capacity in terms of law enforcement.

“We [BCM] do not have metro police, as is the case with other cities, so we will not have capacity to deal with that additional responsibility.

“That is the difference between us and eThekwini Metro [Durban] for example. They have police that we do not have, and they will have the capacity to monitor all their areas.”

Premier Oscar Mabuyane’s spokesperson, Mvusiwekhaya Sicwetsha, was asked the same question about the blanket ban in the province.

“We asked for that because of the risk levels,” he responded.

However, Pakati stressed those in the hospitality and tourism sectors should be assured that their operations in the coastal areas would remain unaffected.

“Remember, hotels and restaurants are open. People are not coming there to swim.

“Our main issue is people swimming in large numbers and recklessly gathering in open spaces, so the hospitality and tourism sector is not going to be affected by this.”

The Garden Route district municipality in the Western Cape, another Covid-19 hotspot, is not taking the beach ban in the region lying down.

On Tuesday, it and regional stakeholders undertook to challenge the ban.

“Businesses hoping the December holiday break would bring a much-needed cash injection after the disastrous first round of lockdown measures are in despair.

“Cancellations have already begun streaming in as visitors take their business elsewhere,” she said.

“These new draconian measures are, for many, the final death knell for their businesses and the end of thousands of jobs in the tourism sector the length and breadth of the Eastern Cape coastline.”

Beside the statuses and actions of the various regions, the Eastern Cape government is deeply concerned about the impact the virus' second wave might have.

The Bhisho government this week issued a directive for all provincial government departments to send thousands of non-essential workers home until next year.

A memo issued by the province's administration boss, director-general Mbulelo Sogoni, on Monday, instructs all government departments to vacate staff from Thursday until January 8. Civil servants will be forced to take from their leave days to compensate for some of the days they will be sitting at home or working remotely.

In his circular to all heads of departments on Monday, Sogoni said: “It is clear that the provincial administration needs to implement all reasonable measures to safeguard its employees in these trying times.

“Heads of department are therefore requested to minimise the risk of Covid-19 exposure at the workplace by allowing employees who do not perform essential or critical services to work remotely.

“The remote working arrangements will be effective from December 17 until January 8, but it is critical for business continuity that departments continue to render the required services through the remote working platforms and that this period is not regarded as paid leave where employees have not taken approved leave.”