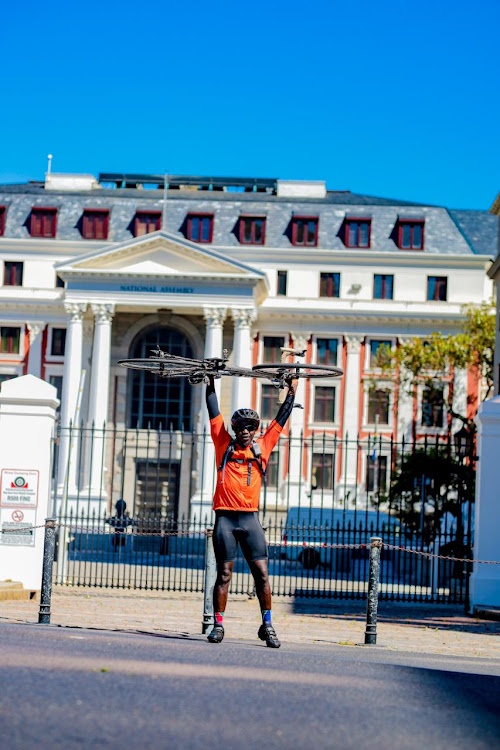 Nyiko Masango has cycled for more than 3000km to advocate for men to be present in their children's lives
Image: Supplied

Nyiko Masango, who embarked on a 3,143km cycling tour from Beitbridge in Musina to Cape Town, believes that he has achieved his goal of spreading the message on the importance of a father in a child’s life.

Speaking to Sowetan on Wednesday, an hour after he arrived in the mother city, the 43-year-old father from Nkowankowa, Tzaneen in Limpopo,  said he did what he was set to accomplish and was even a day ahead of his schedule.

“I had planned to arrive in Cape Town on Thursday but arrived two days earlier. However, I got delayed as I had to cycle with cyclists from this side as they know the route better, and the highway was busy. They took me through the roads they normally cycle on and this was an amazing journey with no incidents on the road except for a few punctures, expected from cyclists. I managed to arrive in CT in one piece.  At the moment we are still looking at how much we raised but basically it's one-third of what we had aimed to accomplish,” Masango said.

A personal experience of fighting to be present in his child's life led to Masango starting this ‘Presence in fatherhood’ campaign.

He shared that when he divorced his ex-wife she did not want him to see his son and he had to approach the courts in order to have access to him.

That is when he had the  idea to raise funds for a boys leadership academy, which will have mentorship programmes for boys.

“The main objective of the cycle was to promote the importance of a father in a child’s life and advocate for fathers who had been denied access to their kids. My focus in the next coming months is to start a boys leadership academy to raise funds to start a cycling club of boys between the ages of 8 and 13 in my township. I chose cycling because it’s one of the sports I have been doing ever since I was 9,” he said.

Masango now plans to relax before getting back to his initiative.

“From now I will focus more on the mentorship programme and still continue with the ‘Presence in fatherhood’ campaign to challenge men to become actively involved in their children’s lives,” he said.

After taking a bold stand against gender-based violence through the Uzalo TV commercial, seasoned actor Masoja Msiza has composed a song that tackles ...
Entertainment
1 year ago

Mona Monyane gets real: Have that child for you, sis

"If he sticks around and pulls his weight then great but if not life must still go on, joyfully! " she said.
Pic of The Day
1 year ago
Next Article