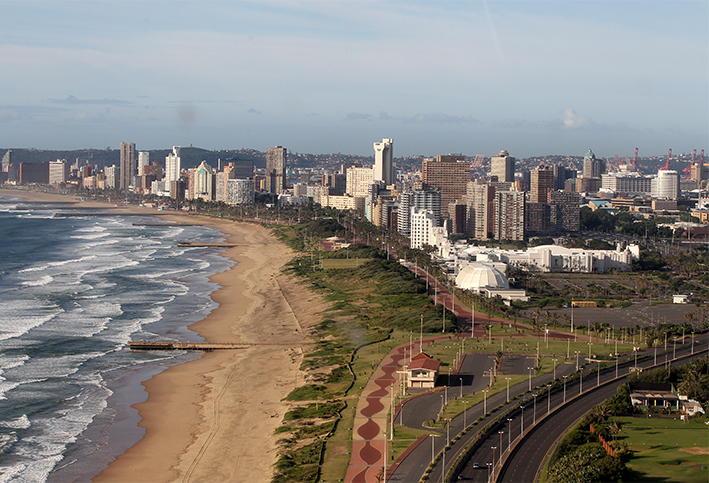 Plett Tourism supports the closure of beaches on December 16 and 25 and January 1 — when people gather in numbers over the festive season.
Image: Sandile Ndlovu

Coastal towns identified as Covid-19 hotspots on the Garden Route and in the Eastern Cape are reeling as tourists cancel holiday bookings after the closure of popular beaches.

The impact of the beach ban is anticipated to run into hundreds of millions of rand due to the cancellation of accommodation bookings which could lead to more job losses and businesses closing.

On beaches spared from the festive season ban, such as those in Cape Town, authorities are scrambling to enforce new lockdown rules published on Tuesday that limit operating hours to between 9am and 6pm. Failure to comply will see the national government step in and shut down affected beaches for the festive season.

Plettenberg Bay Tourism CEO Patty Butterworth said, “Accommodation cancellations have been confirmed and more cancellations will undoubtedly follow, causing further damage to a local economy already battered by the loss of approximately R48m due to the cancellation of the Plett Rage, compounding the overall loss to an estimated well over R200m in Plettenberg Bay alone.

“Such a loss on top of massive business closures is unsustainable in our small economy which has been counting on a successful year-end season to commence the recovery process from the initial lockdown.”

The Plettenberg Bay Tourism Association was in a “complete state of shock” after  President Cyril Ramaphosa’s announcement about the closure of all Garden Route beaches between December 15 and January 3.

“By closing the beaches and thereby compelling residents and visitors to restrict their activities to the town and other areas there is a risk of overcrowding in other areas such as restaurants and shops and an increased propensity to cause spread in other areas which are of concern,” said Butterworth.

Plett Tourism supports the closure of beaches on December 16 and 25 and January 1 — when people gather in numbers over the festive season.

The DA has given Ramaphosa until 5pm on Wednesday to provide reasons for the closure of beaches along the Garden Route — “failing which, we will approach the courts for urgent relief,” said party leader John Steenhuisen.

Butterworth said Durban — where beaches will only close on peak days — had 200km of beaches, with some located adjacent to a big city, that were inherently overcrowded. “Plettenberg Bay has 20km of widely spread unspoilt beach. If Durban beaches can remain open, common sense would suggest that a small beach town would be less of a threat and should stay open. Durban tourism statistics for 2019 show that more than 314,000 tourists arrived in December. Plettenberg Bay welcomes approximately 35,000 tourists.”

“We did not get what we asked for. We hosted the national minister to deal with the spike and with our readiness as the Garden Route. In that meeting there were five municipalities present. None of the municipalities asked for the beaches to be closed.”

Buffalo City mayor Xola Pakati is not 100% sure why the metro has not been declared a Covid-19 hotspot, but he suspects it has to do with fatality ...
News
1 year ago

Asked what the impact of the closure of beaches was, Booysen said: “This is devastating. The announcement has crippled businesses. Some of the holidaymakers have cancelled their bookings. This will lead to job losses. Some businesses may not be able to recover.”

He said the government should explain why the Garden Route had been treated differently to  KwaZulu-Natal.

Nelson Mandela Bay executive mayor Nqaba Bhanga said on Tuesday, “Covid-19 is still our reality and it continues to steal our friends and family members from us. A total of 105 patients are currently in the intensive care units ... We know the new regulations are difficult for everyone, but we are begging our residents to adhere as this will ensure that we all cross over to the new year in a healthy state.”

Knysna Tourism CEO Colleen Durant told TimesLIVE on Wednesday that a “substantial number” of bookings had been cancelled due to the closure of beaches.

“We’ve had cancellations and that is very sad because it impacts the economy very badly. We’ve tried to mitigate that by encouraging people not to cancel because we have so much more than beaches around here,” Durant said.

She said waterways, including rivers and lagoons in the Knysna area were still open and fishing was allowed for those who had permits. “We are still encouraging people to come here. There is still a good holiday and getaway to have.”

Police minister Bheki Cele embarked on a tour of beaches in and around Cape Town early on Wednesday to check if the regulations were being complied with.

[TODAY] Spot checks on Cape Towns beaches will be the order of the day today as Police Minister Gen Bheki Cele and @SAPoliceService top management visit various beaches to inspect compliance of #COVID19 regulations after stricter regulations were announced by the @PresidencyZA pic.twitter.com/N6EzQ4bQqU

“The threat is that if we don't comply the beaches could be closed completely,” he said.

“We've had to change shifts ... Since this morning we are starting with more vigorous engagement with the public. This is something that could end up in very ugly confrontations. The approach we're taking is, let's be reasonable about this, these are the [regulations], if we don't comply we might have the beaches closed completely.”

Beachgoers breaking the rules, he said, would be warned or fined or face arrest as a last resort if they refused to provide authorities with their names and addresses.

Health minister Zweli Mkhize said on Tuesday that there had been 210 more Covid-19 related deaths in the space of 24 hours. Broken down by province they were: Eastern Cape 95, Free State six, Gauteng 10, KwaZulu-Natal 23, Limpopo six and Western Cape 70.

Joggers, walkers and pigeons out and about on Durban's beachfront

A handful of people wearing masks jogged and strolled along Durban's promenade on an overcast Wednesday morning under the watchful eye of law ...
News
1 year ago

Amended lockdown regulations published on Tuesday make provision for people and businesses breaking the rules to be fined or spend up to six months ...
News
1 year ago
Next Article