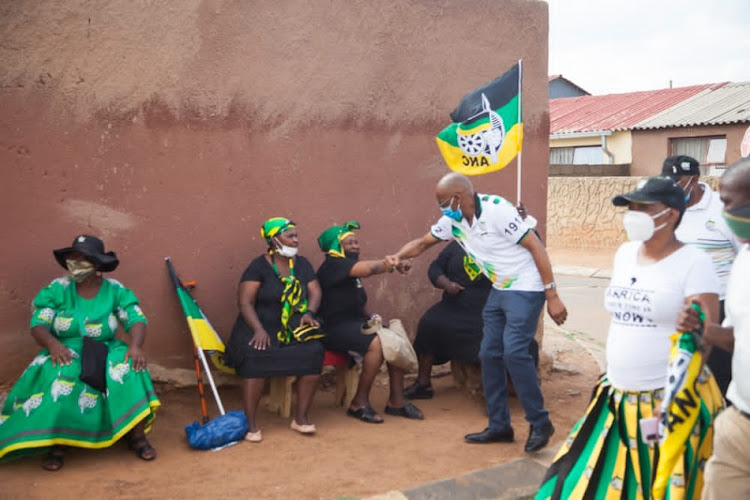 Ace Magashule campaigns door to door. He has made it clear he won't step aside without a fight.
Image: Musa Masilela

ANC secretary-general Ace Magashule will stay put, despite the party's ethics body recommending that he immediately steps down, pending the finalisation of his corruption case.

The embattled Magashule was dealt a blow just days after appearing before the party’s integrity commission, with the body calling for his immediate temporary removal from office.

However, ANC spokesperson Pule Mabe told journalists on Tuesday that Magashule will remain in office until the party’s highest decision-making body, the national executive committee, meets next year to either adopt or reject the commission's report.

“The secretary-general remains the SG of the ANC and [is] expected to do the work that an SG of the ANC is expected to be doing,” Mabe said. “The NEC is fully aware of processes that are to be undertaken. The last NEC [meeting] that we had, where the NEC was closed by the president whose closing was made open to the media, did outline what is going to be happening.”

ANC secretary-general Ace Magashule must step aside with immediate effect, the party’s integrity commission has recommended.
News
1 year ago

The NEC is now faced with the major task of deciding Magashule’s future in the new year, before he makes his second court appearance in February.

Mabe condemned the leaking of the report and said that the NEC was expected to receive guidelines on what happens in the case of Magashule and others next year. Until then, Magashule remains put.

“The NEC of the ANC, at the right time, will engage with reports that come before it, and if the NEC wants to pronounce itself on such reports it shall do so. As matter stands, the NEC of the ANC has not sanctioned the distribution of any report — none whatsoever — but it is aware of the existence of a report from the integrity commission,” Mabe said.

He said the NEC was not denying the existence of the report but that it had not formally discussed it.

The integrity commission is a structure of the NEC and its reports are debated at its meetings where its recommendation are either accepted or rejected.

The military vets were speaking on Tuesday after news that the ANC's integrity commission had suggested that the secretary-general step aside.
News
1 year ago
Next Article