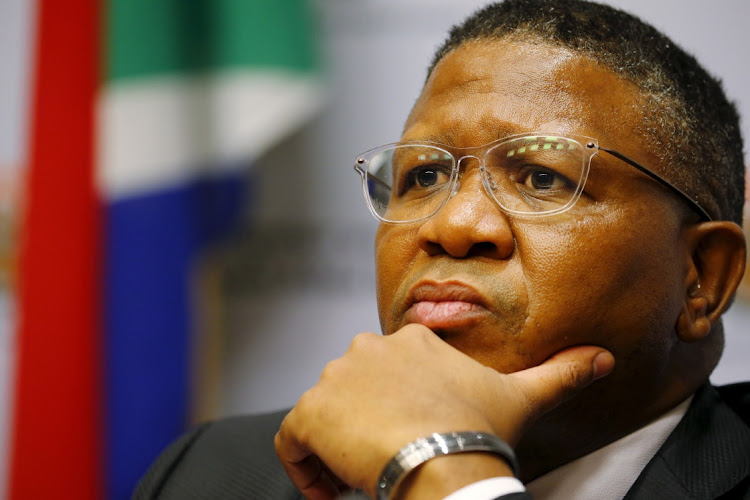 Transport Fikile Mbalula said if ANC members are accused of anything by a court of law, they should not have to wait for the party's national executive committee to tell them to step aside.
Image: Reuters

Transport minister Fikile Mbalula has thrown his weight behind ANC leader Cyril Ramaphosa's call for party members who are charged with crimes to step aside.

This comes as ANC secretary-general Ace Magashule is expected to appear at the party's integrity commission on Saturday. Magashule is facing 21 corruption-related charges linked to a R230m asbestos-eradication tender awarded during his time as Free State premier.

Speaking on eNCA, Mbalula said if ANC members are accused in court, they should not have to wait for the party's national executive committee (NEC) to tell them to step aside.

“When you are called to the court, it means those who are accusing you have a case for you to answer. You do not need to be told by the NEC to step aside, you must," he said.

Weighing in on Magashule, Mbalula said in SA, politicians don't just get convicted because of their credentials.

“SA must appreciate the fact that law enforcement has now been acting and acting decisively on a whole lot of issues,” he said.

“In SA, you don’t just get convicted because you are political ... and you don't just chase people because they’ve got political credentials, you've got a case to prove.”

This is not the first time Mbalula has spoken out against Magashule.

In 2017, Mbalula tweeted and later deleted: “Ace Magashule is a definite no no no, the man will finish what is remaining of our movement. He will kill it.”

Speaking to Eusebius McKaiser on Radio 702 in April 2019, Mbalula said while political leaders like Magashule have been implicated in state capture, they must be found guilty in a court of law, as SA is a law-abiding society.

ANC secretary-general Ace Magashule will present himself before the organisation's integrity commission on Saturday.
News
7 months ago

Deputy state security minister Zizi Kodwa has revealed that he appeared before the party's integrity commission on Saturday.
News
7 months ago
Next Article