'Executive allowed to get away with far too much,' says DA in parly 2020 review 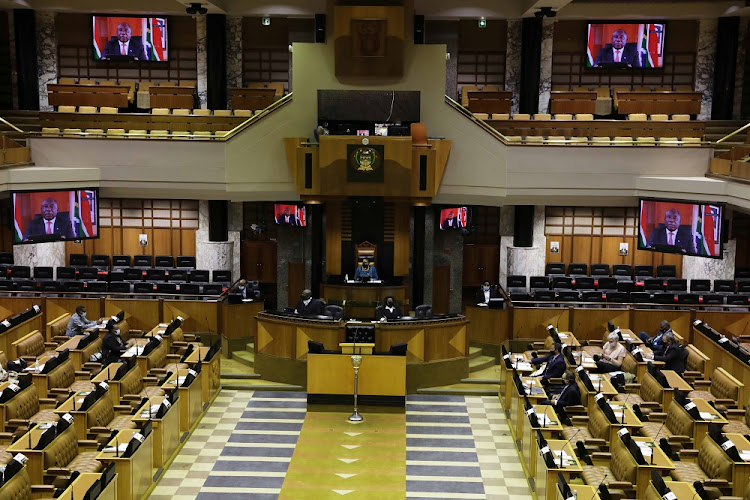 HEAR, HEAR President Cyril Ramaphosa last month appeared before the National Assembly in a hybrid plenary sitting to answer questions on a range of issues, including state capture, corruption, the financing of his 2017 ANC presidential campaign and racial polarisation in SA.
Image: Esa Alexander/Sunday Times​

Parliament dropped the ball at the start of the Covid-19 lockdown by allowing the executive latitude to implement lockdown regulations without any checks and balances.

This is according to DA leader John Steenhuisen, who said on Thursday that the national legislature could have been quicker in playing its oversight role when the national coronavirus command council started implementing lockdown regulations — rules which ranged from laughable to downright dangerous, according to the DA.

“The lights were off in parliament for far too long and the executive was allowed to get away with far too much latitude for many weeks before parliament started to act.

“By week five of the virus, more people had died from police and army brutality than from the virus itself,” said Steenhuisen on Thursday as the DA reviewed its parliamentary performance for 2020.

Parliament suspended its business on March 18, three days after President Cyril Ramaphosa declared a national state of disaster and few days before the start of a parliamentary constituency programme.

Other oversight committees started holding meetings only about two weeks later, with the first virtual plenary session — a hybrid model where no more than 100 MPs were physically present in the chamber while the rest connected virtually — being held towards the end of May.

Steenhuisen said he thought parliament was too slow out of the blocks to adapt to the new normal. But when parliament did start to get the ball rolling there were some significant successes, he said.

Minister in the presidency Jackson Mthembu has slammed the DA's John Steenhuisen for "meddling" in the ANC's internal affairs.
News
11 months ago

Steenhuisen gave parliament an underwhelming 4.5 out of 10 for its performance this year.

The DA blew its own trumpet, claiming to have made every effort to hold the government to account.

“Outperforming all other opposition parties, the DA asked 66% of all parliamentary questions in the National Assembly this year,” said party chief whip Natasha Mazzone. “We submitted 1,893 written questions that matter to our constituencies and South Africans, and 423 (49%) through the National Council of Provinces.

“These questions play a vital role in holding the executive to account and despite some ministers doing their best to simply ignore the workings of parliament, the DA’s questions revealed instances of either misconduct, maladministration or incompetence that would have simply been swept under the rug otherwise,” she said.

Mazzone said without the DA’s scrutiny, South Africans might never have known:

The party insists that an ad hoc committee to oversee all Covid-19 related initiatives and expenditure would have minimised the extent of looting of Covid-19 funds. Their request for the establishment of such a committee was shot down by parliament's presiding officers.

“I wonder how much more of the PPE scandals and petty regulations could have been avoided had that ad hoc committee been able to function right at the beginning of the crisis,” said Steenhuisen on Thursday. “We found it completely irresponsible to have an unelected body essentially making regulations with no oversight whatsoever,” he said.

The DA says it will push harder in the new year for the establishment of a committee that will conduct oversight over the presidency. It is the only vote in parliament that does not account to a parliamentary committee.

Steenhuisen said this was “significantly problematic” because it reduces the ability to exercise oversight over the presidency which has a budget that is bigger than that of the sports, arts and culture department.

Steenhuisen said the saga over defence minister Nosiviwe Mapisa-Nqakula giving ANC leaders a lift in an air force jet was an example of why the president had to account to a parliamentary committee.

Mapisa-Nqakula indicated she had received permission from the president to fly to Zimbabwe.

Minister in the presidency Jackson Mthembu has slammed the DA's John Steenhuisen for "meddling" in the ANC's internal affairs.
News
11 months ago

Phumzile Van Damme took to Twitter on Friday afternoon and disclosed that party leader John Steenhuisen had given her a sabbatical without her asking ...
News
11 months ago
Next Article