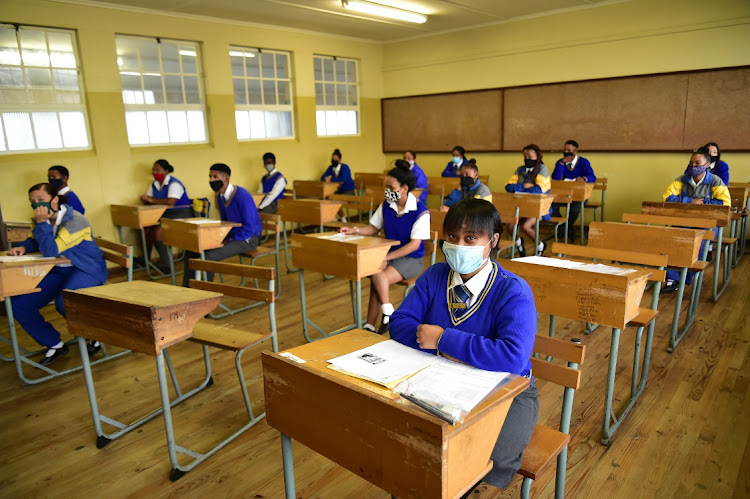 Four entities are challenging the decision for matriculants to rewrite maths and science exams after two papers were leaked in November.
Image: Eugene Coetzee

And a more extensive exam leak four years ago had not resulted in exams having to be rewritten — putting into question the inconsistency of education officials' decision-making, Sadtu argued in the high court in Pretoria on Thursday.

The court is hearing applications from Sadtu, AfriForum and independent schools that seek to reverse the department's decision for grade 12 pupils to rewrite the physical science paper 2 and mathematics paper 2. The SA Teachers’ Union/Onderwysersunie (SAOU) was on Thursday permitted to join in on the matter as a friend of the court.

The parties are seeking an urgent court order setting aside Motshekga's announcement that the two leaked papers must be rewritten.

The court is also being asked to compel the basic education department and Umalusi to mark the scripts of the four pupils represented by AfriForum and those who were not involved in the alleged irregularity regarding the leaked papers.

The presiding officer of the court, judge Norman Davis, heard the applications simultaneously in the joint hearing.

Sibuyi said the decision, being taken by Umalusi, was a clear violation of the decision-making process.

“In the event of the leakage of a national examination question paper, the director-general of the Department of Education and the minister of education should decide on the most appropriate course of action,” he told the court.

He said the department’s decision was premature and that in an event of a leak, there must be a full investigation.

Sibuyi said in this matter, the department decided not to proceed with investigations, fuelling the union's belief that the decision must be set aside

In addition, Sibuyi said, the union is of the opinion that the leaks in 2016 were on a larger scale than this year, but there was no rewrite ordered then.

“They need to be consistent,” he told the court.

AfriForum's senior counsel, Quintus Pelser, told the court that the department had other options to follow the leak trail and could have exhausted all these avenues before calling for a rewrite.

“They could have audited the distribution chain or appointed a private investigating company to follow the trail of the leak, but this did not happen,” Pelser said.

Pelser said if the irregularity was not caused by hundreds of thousands of pupils, then examination answer scripts must be marked and results must be released.

Citing one pupil who is supposed to get married on Saturday and go on honeymoon on December 15, Pelser said the department didn't take into consideration that people would have already made holiday plans.

Representing independent pupils, advocate T. Strydom, argued that the decision to have a rewrite is an effort by the minister to correct one wrong with a further wrong as the mistake was done by a chosen few.

Strydom said that there was a very small group of pupils, the “top achievers group”, who received the leaked paper.

He said his clients have already handed back their notebooks and destroyed their notes as was the norm when done writing an exam.

Strydom argued that the decision to have a rewrite was not rational and must be questioned.

The proceedings will continue after a short adjournment for the department to reply.

Close to 400,000 matric pupils are being collectively punished by having to rewite two leaked examination papers while only 195 pupils had access to ...
News
1 year ago

The matric pupils who briefly appeared in the North Gauteng High Court in an effort to stop a rewrite of the physical science and mathematics final ...
News
1 year ago
Next Article