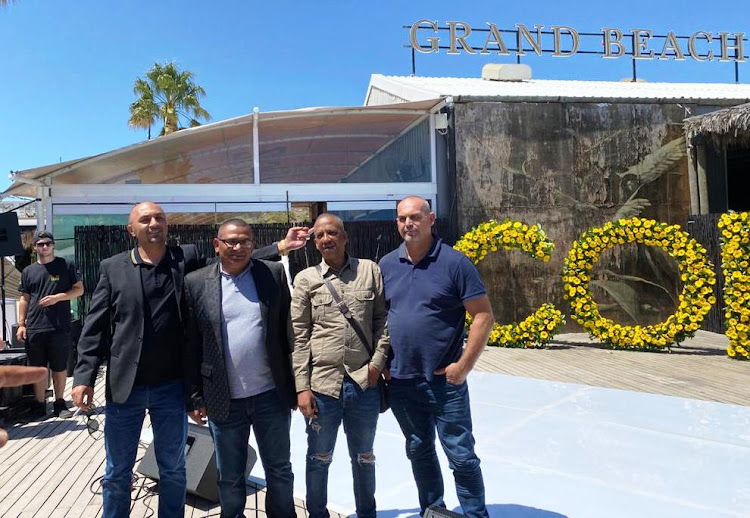 Nafiz Modack, Colin Booysen, Ashley Fields and Jacques Cronje on February 20 2020 after they were acquitted of extortion. Cronje was stabbed and shot on Friday night.
Image: Supplied by Nafiz Modack

Alleged underworld figure Jacques Cronje, right-hand man of alleged underworld boss Nafiz Modack, was stabbed and shot in the face on Friday night in an incident which seemingly started as a bar brawl in Cape Town.

Western Cape police spokesperson Capt FC van Wyk said a case of attempted murder was being investigated after a shooting at around 7.40pm in Da Gama Road, Brooklyn. He said a 49-year-old man was shot and injured.

“Circumstances surrounding this incident are under investigation. The injured victim was taken to a nearby medical facility for treatment,” said Van Wyk.

Modack confirmed Cronje was involved in the incident.

He said it started when Cronje was drinking at a bar in Koeberg Road, Milnerton, and got into a fight with patrons at the bar.

“He knocked them out, he moered them, and they came back five or 10 minutes later,” said Modack.

“He was standing and drinking at the bar, obviously with his back to the door, when two guys came and stabbed him in the back and in the neck without him seeing anything. Then he fought with them again.”

It’s nothing to do with hits and stuff like that.

He said Cronje left the scene and drove home. It is believed one of his attackers followed him.

“When he got home, one guy was standing there waiting for him and shot him in the face,” said Modack.

“The same two laaities [young men] he was fighting with, they’re from the area. It’s nothing to do with hits and stuff like that,” said Modack.

Sources said Cronje had gunshot wounds in his nose and an ear.

Lakay was murdered in a hit in Belhar in 2018 in the run-up to the extortion trial.

The case was spearheaded by murdered anti-gang unit detective Lt-Col Charl Kinnear. The accused were acquitted.