Victims of crime should be offered alternatives to taking on new identities in witness protection: Mkhwebane 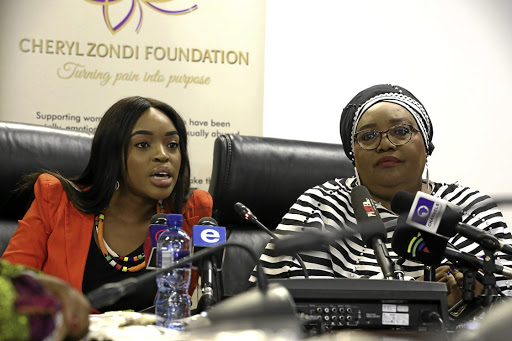 Cheryl Zondi at the launch of her foundation to help victims in December 2018. With her is Thoko Mkhwanazi-Xaluva, the then chair of the Commission for the Promotion and Protection of the Rights of Cultural, Religious and Linguistic Communities.
Image: Thulani Mbele

Public protector Busisiwe Mkhwebane has ordered the director of the office for witness protection to issue a written apology to the state's star witness in the Timothy Omotoso trial, Cheryl Zondi, within 30 working days.

This is after Mkhwebane found that the office for witness protection had failed to offer Zondi an alternative form of protection to adopting an entirely new identity and relocation.

“We must at all material times focus on the plight of the complainants - in this case, victims of crime - rather than anything else,” she said. “We run the risk of complicity in subjecting victims to secondary victimisation if we, as institutions that should remedy any shortcomings and provide victims with appropriate redress, turn our attention and resources to issues other than the plight of those victims.”

Mkhwebane on Friday released her findings on an investigation of a November 2018 complaint filed on behalf of Zondi with her office against members of the witness protection programme. The complaint was made during a webinar held to shine the spotlight on the struggles of gender-based violence victims.

Rape and sex assault accused Timothy Omotoso had his application for the testimony of two witnesses to be ruled inadmissible dismissed by the Port ...
News
1 year ago

Zondi is a key witness in the state’s human trafficking, rape and abuse of young women case against Omotoso, a pastor.

Mkhwebane said after Zondi’s testimony against Omotoso, in which she detailed how she was allegedly abused by him, Zondi was informed by a police brigadier that there was a potential threat on her life.

Mkhwebane said her office was approached by the CRL Rights Commission's Thoko Mkhwanazi-Xaluva on behalf of Zondi on November 15 2018, alleging maladministration on the part of the office for witness protection of the national director of public prosecutions.

She said notwithstanding the risk to her safety, Zondi declined to be placed in a witness protection programme as she was of the view that the system was extremely rigid, too disruptive and too unsympathetic to victims of crime.

Mkhwebane said providing the complainant an option to stay where she was, when she clearly did not feel safe, did not constitute alternative means of protection as envisaged in the act and did not meet the standards of the service that the state and the office for witness protection committed to and are expected of a public functionary.

“The act recognises in section 10 that there might be circumstances in which witnesses or related persons might not be able to adjust to the witness protection programme as invoked through the provisions of the act, having regard to personal characteristics, circumstances and family or other relationships.

“In such circumstances, the act implores the director to consider and explore the availability of other means of protection, without invoking [entry into the witness protection programme].

“To abandon such a witness or victim if he/she indicates that they will not be able to adjust to the programme, is in disregard of the very rights that the government and the institutions concerned profess to recognise and commit to.”

The officers, she said, had not “lived up to the values and principles of fair and responsive public administration”, she said.

“The conduct of the members of the office for witness protection in this regard amounts to maladministration ... and improper conduct.

“I also found that the allegation that [Zondi] experienced the interaction with the members of the office for witness protection as traumatic and prejudicial is substantiated.”

The public protector said Zondi was already suffering severe hardship as a result of being both a victim and a witness in a serious criminal matter that involved abuse and violation of the dignity of a number of young girls, including herself.

“To be made aware of the fact that her life was at risk, and then to be left without effective support from the very institutions that were expected to be accommodative of and sensitive to her needs and circumstances, added to the trauma that she was already experiencing.”

In addition to a written apology, she instructed the acting director of the office for witness protection to establish improved guidelines to enforce the rights of victims and witnesses. In the interim, the office should hold the inherent consideration of section 10(1) (e) of the Witness Protection Act “where the probability that the witness to adjust to protection, having regard to the personal characteristics, circumstances, family or other relationships of the witness are considered”.

A copy of the report will be submitted to the minister of social development, “in so far as it might relate to the statutory interventions and intersectoral programmes or victim support service programmes that the department and relevant institutions have embarked on with the publication of the draft Victim Support Services Bill, to promote integrated service delivery for a victim and witness empowerment programme.”