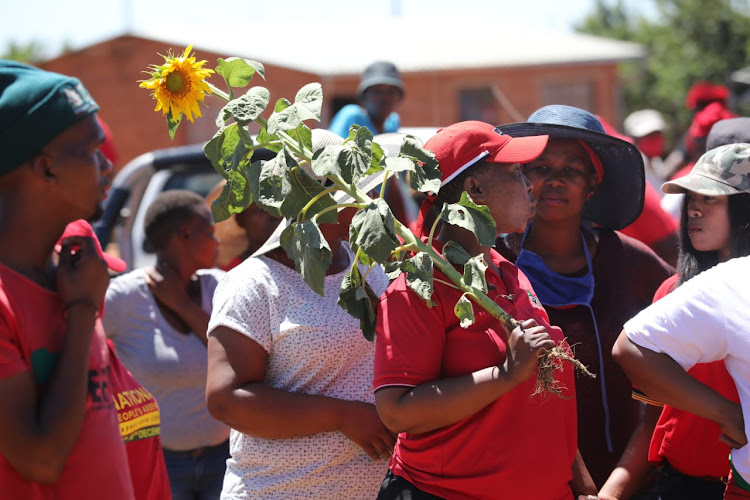 Dozens of community members have gathered in Tlhabologang township in Coligny to march to the local police station and demand answers from the police following the acquittal of farmers who allegedly killed Matlhomola Moshoeu in 2017.

Papiki Babuile, provincial secretary for the EFF in North West, said the community was angered by police incompetence in the town.

"We want justice for Matlhomola and his family and we demand that the National Prosecuting Authority  appeal the acquittal of the alleged killers," said Babuile.

Babuile said the community also demanded a report from the Coligny police on what exactly they did and did not do on the case during their investigations.

"We blame the police for the acquittal. Should they have done their job and closed all loopholes, the killers would have not been acquitted, " said Babuile.

Babuile said the memorandum also demands that the police provide a full report of all opened cases on farm brutality killings and all other cases related to the abuse of farmworkers.

"We want to know how many cases have been opened till this day. How many successes have police made, including convictions," said Babuile.

Babuile said the memorandum would be handed over at the Coligny police station, where the NPA would  also be present to receive their grievances.

"We will be giving them 72 hours to appeal. Failure for the NPA to appeal will result in the EFF taking it and  appealing it."

Last week the family of Moshoeu was dealt a blow when the Supreme Court of Appeal (SCA) overturned the conviction and sentence of two men who were held responsible for his killing.

His was a murder that shook the nation. It also brought to the fore racial inequalities that make up the social fabric of small towns such as Coligny in the North West.

The two farmers, Phillip Schutte and Pieter Doorewaard, were convicted of the 2017 murder of the teenager, whom they accused of stealing sunflower heads.  In retaliation, the community set alight properties owned by white citizens.

The mother of the late Coligny teenager, Matlhomola Mosweu, is a heartbroken woman whose life has been turned upside down again just 12 months into ...
News
1 year ago
Next Article