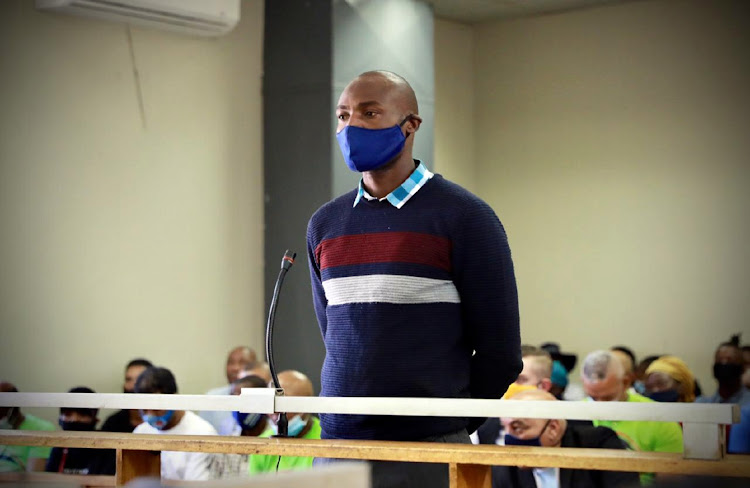 Forster Netshiongolo appeared briefly at Protea Magistrates Court on charges of accessory to murder after the fact, defeating the ends of justice and possession of prohibited ammunition in connection with the killing of Nateniël Julies in Eldorado Park. The matter was postponed to 1 December 2020.
Image: Sebabatso Mosamo/Sunday Times

The third policeman implicated in the murder of Nateniel Julies says he should be released on bail because he played no role in the teen’s murder.

Forster Netshiongolo, who is charged with Julies’ murder after the fact, defeating the ends of justice and illegal possession of ammunition, told the Protea magistrate's court on Tuesday that it is impossible for him to have had a hand in the teen’s murder as he was not on the scene when Julies was gunned down on August 26.

Netshiongolo said this through an affidavit that was read out in court by his lawyer, Onke Maseti, during his bail application on new facts.

The sergeant, along with his colleagues Simon Scorpion Ndyalvane and Caylene Whiteboy, were previously denied bail in the same court on September 28. Ndyalvane and Whiteboy face charges of murder, defeating the ends of justice, possession of prohibited ammunition and discharging a firearm in public.

“On my arrival at the hospital the deceased was already certified dead by the treating doctor, so it is highly improbable that I would have played any role in the death whereas the paperwork confirming his death has already been completed,” Netshiongolo said.

“There is no evidence before this court that my actions on August 26 2020, were going to benefit my co-accused not to be charged should the state decide to charge them.”

The state alleged that Netshiongolo allegedly planted two 9mm rounds at the scene of the murder to make it appear as though a shooting had taken place.

“It is my understanding that the live ammunition that I booked does not assist any of my co-accused not to be charged and prosecuted as I never acted in any manner that is contrary with police duties,” he said.

The state found that Netshiongolo had called in sick and was off-duty on the day of the murder and that he assisted Ndyalvane and Whiteboy in a bid to cover up the murder.

“It must be clear before this court that I am a police officer of SA and I am on duty 24 hours a day, 365 days a year. By virtue of the fact that I am off work does not automatically mean I cannot attend a crime scene because should I fail to do so I can be charged departmentally for not adhering to the police Act,” he said.

Netshiongolo said he did not act outside his duties as a police officer and that he was not assisting his co-accused from being charged and prosecuted.

“It should be borne in mind that the live ammunition that I handed over to Col Chauke was totally different from the one alleged to have been used when the deceased was shot and killed.”

He requested the court to grant him R5,000 bail and to add further bail conditions.

Maseti told the court that should he be granted bail, he will relocate to his parental home in Tshiawelo.

However, prosecutor Adv Mzwandile Mrwabe said Netshiongolo’s application was devoid of any new facts, save for the alternative address that was provided.

“The state is only hearing this application today and has not had time to prepare a response. Be that as it may, it is still our stance that we oppose bail. We would request for the matter to be remanded in order for us to draft a response,” Mrwabe said.

Magistrate David Mhango postponed the matter for Thursday in order for the state to respond to the application.

Cop implicated in Nateniel's murder not in court after mix up

The mother of an Eldorado Park teenager who was shot and killed allegedly by police officers believes she is one step towards getting closure after ...
News
1 year ago
Next Article