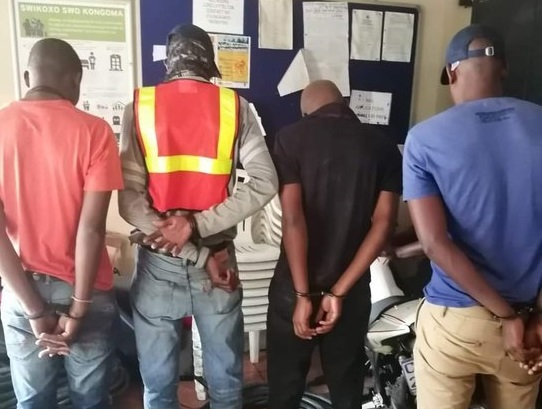 Taximen accused of pulling dirty tricks on motorists were arrested by traffic officers at the weekend.

To slam the lid on the bust, the officers monitored them to observe their modus operandi.

Gauteng traffic police said its public transport intervention unit arrested four suspects on Saturday after receiving a complaint from members of the public in Olievenhoutbosch, Centurion.

The suspects, in a vehicle affiliated to a taxi organisation, were stopping motorists and demanding cash from them on the R55 road.

“Officers strategically positioned themselves to monitor the reported vehicle.

“The Gauteng traffic police officers immediately pounced on the suspects and detained them at Olievenhoutbosch police station. The traffic police recovered an illegal firearm and the money solicited from motorists.”

All four suspects will appear in the Pretoria magistrate's court on Monday to face charges relating to armed robbery, kidnapping, possession of an illegal firearm and impersonating the duties of traffic police officers.

Nothing captures the crisis of our football on the continent than this week’s suspension of Confederation of African Football president Ahmad Ahmad ...
Opinion
1 year ago

ANC president Cyril Ramaphosa has praised Nomvula Mokonyane, the party's head of organising, for the work she has been doing in rebuilding the party
News
1 year ago
Next Article