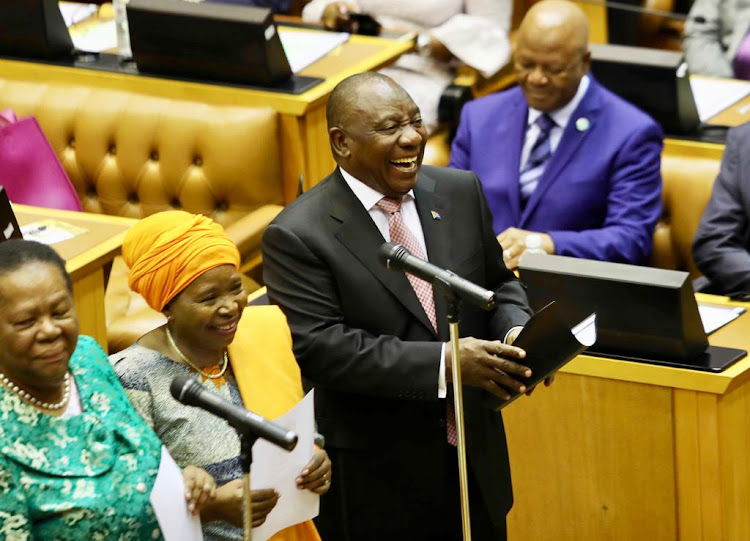 President Cyril Ramaphosa and ministers Nkosazana Dlamini-Zuma and Naledi Pandor during the swearing-in ceremony of parliamentarians in Cape Town on May 22 2019. A senior legal practitioner says Ramaphosa and other members of former president Jacob Zuma's cabinet should be called to account to the state capture inquiry. File image.
Image: Esa Alexander

Senior legal practitioner Vuyani Ngalwana has sent a written request to the state capture inquiry to ask deputy chief justice Raymond Zondo to invite President Cyril Ramaphosa and some of his cabinet members to account for the "nine wasted years" under former president Jacob Zuma.

In his request, dated November 24, Ngalwana said: “My request is that the deputy president during the period that has been dubbed by some as ‘nine wasted years’ (May 9 2009 to February 14 2018) should be invited by the chairperson of the state capture commission to give oral evidence before the commission and be questioned on their evidence.”

Ngalwana, who is acting as a judge in the North Gauteng High Court in Pretoria, told Zondo: "Ideally, the entire cabinet of those years should have been questioned by the commission on their role in the alleged corruption of those years."

However, that has not been done.

Speaking to Sowetan sister publication, TimesLIVE on Friday, Ngalwana confirmed he submitted a request in terms of rule 9.1 of the rules of the Zondo commission.

“I explain in that request why I submit it,” he said.

In his request, he states: “I appreciate the commission has limited time to complete its work by March 31 2021 and it may not be feasible to obtain the evidence of all these persons and assess it in time before the final report of the commission is due for submission to the president who, ironically, is one of those persons who should be questioned.

“But that, with respect, is of the commission’s own doing by the choices it has made as regards which witnesses to invite, leaving out persons who are, in my submission, clearly relevant witnesses capable of shedding light on alleged 'state capture' during their time in [former] president Zuma’s cabinet and senior official positions in organs of state.”

Ngalwana said much has been reported in the media about the excesses of the Zuma administration and the alleged corruption which took place, including the 2016 Nkandla scandal which reportedly cost the taxpayer more than R200m.

“Who made these calculations? How did they arrive at this amount? What are these specific security upgrades. What are the details of the procurement of service providers and who made the decision to award which contract to whom at the department of public works? Who approved the funding at National Treasury?”

On the contentious issue of who funded Ramaphosa’s presidential (CR17) election campaign, Ngalwane said there were allegations of people being appointed to state-owned enterprise board positions, and others being awarded contracts of considerable value, allegedly as a result of their financial contributions to the election campaign in December 2017.

“Are these allegations true or false? Will a bare denial of these allegations suffice for the commission? Documents that could possibly serve as evidence of contributors to the president’s election campaign remain sealed from public scrutiny by court order.”

These, he said, are some of the serious questions that the Zuma cabinet, or at least senior cabinet members, should be called to answer.

“My emphasis is simply to indicate that the terms of reference are wider than just [former] president Zuma, the Gupta family and those portrayed as being associated with them. The terms of reference enjoin the commission to probe also persons who were part of Zuma’s cabinet and public officials (such as directors-general).”

When asked what his response would be to those who might see this as veiled support for the former president, he said, “One word: poppycock."

Zondo to lay criminal charges against Zuma for walking out

The state capture inquiry intends to lay a criminal charge against Jacob Zuma with the police.
News
1 year ago
Next Article