'Threats to police won't be tolerated': Cele continues war of words with Malema 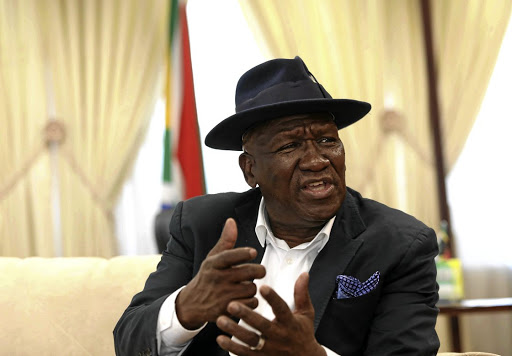 Bheki Cele insists that comments by EFF leader Julius Malema were an incitement to attack police officers and their families.
Image: Esa Alexander

The war of words raging between police minister Bheki Cele and the EFF continues.

In the latest instalment, Cele on Wednesday issued a statement responding to the EFF’s response to his statement — which itself came after a response to Malema's comments at the weekend.

Cele said on Wednesday he was reiterating that there would be consequences for anyone who acted on the threats against police officers or their family members. He added that he wanted to remind the EFF that all police officers remained accountable to the laws of the country, and any alleged wrongdoing by officers would be investigated by the Independent Police Investigative Directorate (Ipid).

On Monday, Cele slammed the EFF for threatening to attack police — and said party leader Julius Malema had crossed the line.

While addressing EFF supporters in Mohokare, Free State, on Sunday, Malema said: “If South African police want a fight, they must declare it. We will treat them the same way we treated them in the 80s, we will not only fight them at the picket lines, but we will also go to their homes and fight them in their own houses with their own families ... we will come for you one by one at your own comfort zone.”

But the EFF has labelled Cele’s statement as empty and grandstanding utterances.

“In what can only be described as hypocrisy and performance of outrage, Bheki Cele and the police union Popcru have taken the Commander in Chief’s condemnation of police brutality against protesters out of context, to present an image of a threat to law enforcement in the country from the EFF. It is a blatant lie and manipulation of the facts,” reads the EFF’s statement.

The EFF said it has been against police brutality since the inception of the party and Malema was just reiterating a long-held position that the patience of people with a police force that he says resembles the apartheid state, is wearing thin.

The party said it had exhibited its respect for the law but this should not be mistaken for an endorsement of repression and the use of state resources to victimise those who stand against the state and injustice.

Cele, however, maintains Malema’s comments were not taken out of context and said he is sure Malema encouraged direct violence against members of the SAPS, their husbands and wives, their children and their extended families.

Cele maintains that such incitement is illegal and doesn’t belong in a democratic society.

“As a political organisation, the EFF and its leader have every right to express their views on the government of the day. However, the threat to the lives of the police, their loved ones and to their homes won’t be tolerated or allowed to happen,” Cele said.