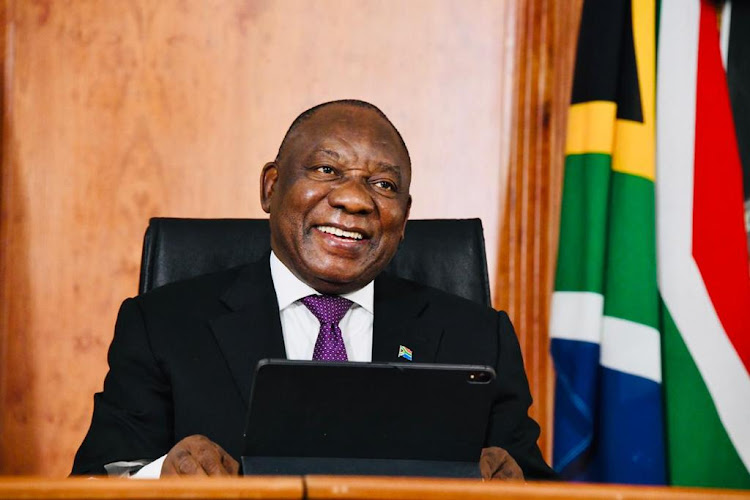 President Cyril Ramaphosa says the ANC is like a cat: 'If you throw it from many storeys up, it will always land on its feet.'
Image: Siyabulela Duda/GCIS

While calling for unity of the ANC, President Cyril Ramaphosa said it was also important  to provide constructive criticism when party members erred.

Ramaphosa was addressing ANC structures in Rustenburg as part of the party's national working committee visit to the North West on Monday.

In a 40-minute speech focusing on the unity and renewal of the ANC, Ramaphosa said the party's unity would ensure improved implementation of its plans, including the recently announced reconstruction and recovery plan.

"How's the mood at Luthuli House? Are you okay?"
News
1 year ago

“We should be focusing more on what unites. And as we focus on what unites us, yes when mistakes are made, we must not just sit back and say 'well ke comrade wa rona' (it's our comrade) we are not going to say anything'.

“There must be constructive criticism. We must be able to put our comrades around the table and say 'here and here you are making mistakes',” he said.

ANC members are divided over the party's handling of those who are accused of corruption, and of enabling state capture. One faction believes its members are being targeted for political reasons and that state resources are being used by the ruling faction to fight party political differences.

Ramaphosa, who was addressing a regional meeting in Bojanala, repeatedly invoked the late statesman and former ANC president Nelson Mandela as he emphasised the importance of upholding the ANC's integrity and defending its unity.

“He did know at the time that the integrity of an organisation like the ANC is absolutely important. Even during this time, we do need to defend the integrity of our movement and deal with all the tendencies that we identified at our 54th conference and in earlier conferences where we spoke about ridding our organisation of corruption, where we talked about being a much more ethically driven organisation,” said Ramaphosa.

He said at government level, the party wants to ensure that the state becomes a capable, ethical and developmental government that puts the people's needs before the leaders' own personal and parochial interests.

Through renewal, Ramaphosa said, members would be able to strengthen the party.

“When Mandela was saying we are handing over the reigns of this organisation to the next generation, they envisaged that we would be the generation that will defend the unity of the ANC, that would renew the ANC and that also would defend its integrity because of its popular standing and objectives among our people,” he said.

Ramaphosa said the ANC could use these topics as a springboard to address the country's challenges.

“It is this that the ANC must focus its attention on, rather than continuing the squabbles among us.

Ramaphosa boasted about the party's performance in recent by-elections, saying it was a demonstration that the organisation remained popular and was still loved by the people.

Earlier this month, the ANC retained 64 municipal wards across the country, winning six new ones and only losing two in the first by-elections held since the start of the Covid-19 lockdown.

Ramaphosa sounded confident that the party had the ability to self-correct, comparing it to a cat that always landed on its feet.

Ramaphosa acknowledged the provincial ANC's problems, saying the organisation was facing “enormous challenges” in the North West and that it has to be stabilised, starting at branch level.

He said the province will hold a provincial conference to ensure there is stability, but added that only 14% of its branches are in good standing.

The requirement is for at least 70% of the branches to be in good standing before the province holds a conference to elect new leadership.

The National Prosecuting Authority said on Sunday that the former personal assistant of ANC secretary-general Ace Magashule has co-operated with the ...
News
1 year ago

The ANC top 6 will meet on Monday when it is expected that the developments around the arrest of its secretary-general Ace Magashule will be ...
News
1 year ago
Next Article