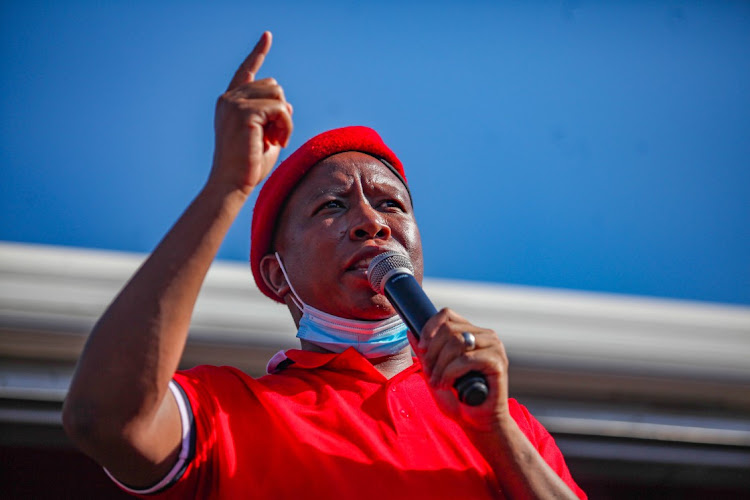 EFF leader Julius Malema, during a rally in the Free State, issued warnings to police, allegedly threatening action against them and their families.
Image: Gallo Images/Sharon Seretlo

The Police and Prisons Civil Rights Union (Popcru) has called out EFF leader Julius Malema for making “irresponsible threats” at the weekend that could endanger the lives of the police and their families.

Malema described the police, who shot rubber bullets at protesters and particularly women, as “cowards” and “fools”.

“If South African police want a fight they must declare it. We will treat them the same way we treated them in the 80s. We will not only fight them at the picket lines, we will go to their homes and fight them in their own houses with their own families,” he reportedly told supporters in Mohokare municipality in the Free State on Sunday.

Popcru said on Monday that it had “noted with disdain the irresponsible threats” made by the red berets' leader.

“In a voice clip, Mr Malema is heard making concerning observations that are demeaning of the role police play in public order policing, while further making threats that could potentially lead to unwarranted attacks of police officers and their families within communities,” the union said in a statement.

This is a call for lawlessness and we are concerned that this attitude is becoming a slippery slope.

“Just as he has done before, verbally attacking the character of our men and women in blue in September for acting out their duties, to an extent where he even labelled their boots as stinky, he has this time around taken his insults to another level, wherein he is encouraging direct violence against members of the SAPS and their families.

“This, by implication, is a call for lawlessness, and we are concerned that this displayed attitude is becoming a slippery slope.”

The union said police were there to protect the rights of all South Africans, regardless of their political affiliation. It added that discussions were held before planned protests about the deployment of law enforcement agencies and safety measures.

“We should never, as South Africans, allow to be dragged into an era wherein resolving whatever differences we have means taking up arms against each other while we have platforms for dialogue.”

“We are not scared of police,” Malema said at the weekend rally. “They think this uniform gives them some superior power. We will see you after you take off the uniform, at night at home when you are about to eat pap.”

A white man was assaulted by dozens of EFF members on Friday after he moved forward through a crowd to address the party's secretary-general, ...
News
1 year ago
Next Article