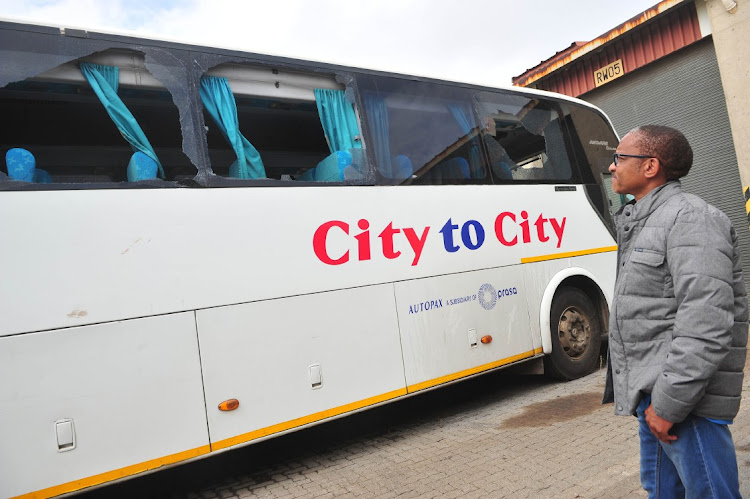 Prasa spokesperson Makhosini Mgitywa next to one of two City to City buses which were shot at near Sosolburg by unknwn people enroute to the Eastern Capo in a space of six days.
Image: Veli Nhlapo

Two City to City buses from Johannesburg en route to the Eastern Cape where shot at by unknown gunmen in two drive-by incidents, sparking the immediate appointment of armed escorts in unmarked cars.

At least four shots hit one of the buses, including one bullet being aimed at the driver’s window in the latest incident which happened on Thursday evening. The two buses were destined for Umthatha and Lusikisiki.

Autopax, a subsidiary of the Passenger Rail Agency of SA (Prasa), which owns City to City and Translux buses, has seen two similar drive-by shootings near Zamdela in Sasolburg in a space of six days.

Although no one was hit by any of the bullets, with three of them shattering the windows before piercing through the roof, several passengers suffered minor glass cuts, Prasa said.

In September last year, a Translux bus driver was killed and another critically wounded after two drive-by shootings minutes apart on the R56 near Ixopo in KwaZulu-Natal.

The first among the latest shooting incident occurred on November 13 and the second happened on Thursday, leaving a bullet lodged in a steel window frame of the driver’s side window.

Prasa spokesperson Makhosini Mgitywa said it has had to hire armed escorts in unmarked cars to ensure perpetrators are brought to book.

For the first time in more than 20 years, commuters are expected to enjoy new fleet of buses and improved service when the Gauteng department of ...
News
1 year ago

He was positive that some of the people behind these shootings will be apprehended.

Mgitywa said the latest incident showed that the perpetrators wanted to seriously harm the diver.

“This was clearly an attempt on the life of the driver first and foremost. It can be argued that the other shots that were fired were meant to scare but the shot that was meant for the driver was meant to kill him and there’s no doubt about that,” Mgitywa said.

“The bullet hit the steel frame and couldn’t go through, but had it penetrated 3cm ... we would be talking a different story now. This is clearly aimed at intimidating City to City and Autopax so that we don’t put our buses on the road.”

SA Transport Workers Union’s Solomon Mahlangu said: “We are very angry that the lives of workers and passengers are at risk. It’s an obligation of Autopax to guarantee their safety when they are travelling in their buses.”

Mahlangu said while they were still mourning the loss of a driver who was killed in Ixopo last year, similar incidents were making a return.

“Law enforcement has to get involved as well. We lost a driver in Ixopo while another one is still on crutches as we speak,” Mahlangu said.

He hoped that CCTV cameras installed by Autopax in the buses about two years ago were able to assist in unmasking the perpetrators.

Translux and City to City operate hundreds of buses across the country in all major cities and smaller towns, with most of their long-distance routes being between Gauteng and the Eastern Cape.

Durban is suspending the city's bus service for two days to prevent the spread of Covid-19 to commuters and its workers.
News
1 year ago
Next Article