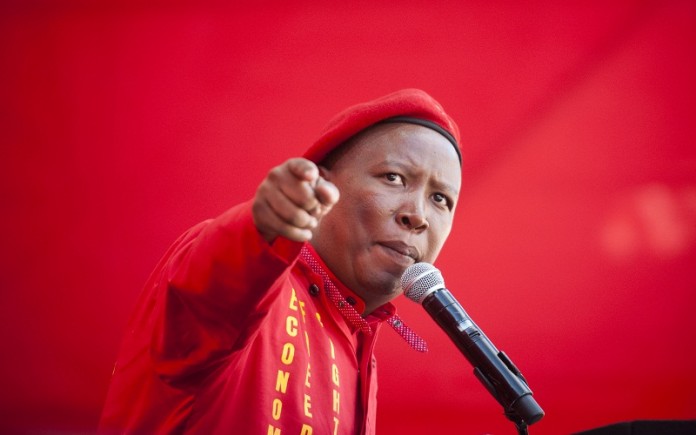 EFF leader Julius Malema told a rally in the Free State, 'We will not only fight [the police] at the picket lines. We will fight them in their homes, with their own families. We are not scared of the police.'
Image: Supplied

Police minister Bheki Cele has called on police to protect themselves should they come under attack.

This follows statements EFF leader Julius Malema made at the weekend, calling on party members to fight police officers.

Cele condemned Malema's statements, and said officers of the law should never be used as bait for political mileage. “The threats to the lives of police members and their families will not be tolerated,” Cele said.

While addressing EFF supporters in Mohokare, Free State, on Sunday, Malema said that if the police wanted a fight, they must “declare it”.

“We will treat them the same way we treated them in the ’80s. We will not only fight them at the picket lines. We will fight them in their homes, with their own families. We are not scared of the police,” Malema said.

[In Case You Missed It]: CIC @Julius_S_Malema says if South African Police want a fight with the EFF they must declare it and we'll treat them the same way we treated them in the 80s.

No one can defeat the power of the masses. #CICinMohokare pic.twitter.com/xD3msnLtqa

He said police thought their uniform gave them some superior power.

“We will see you after you take off the uniform at night, at home, when you are about to eat pap. We’ll arrive and say, 'How are you? Repeat the nonsense you were saying earlier when you were in uniform in the street.'

He said they will go for police one by one, in their comfort zones.

Malema said racism in SA was going to fall.

“Whether they like it or don’t like it, it’s just a matter of time, we are going to everywhere for racists and there will not be a hole for racists. Take a flight or ship out of SA, because they will no longer be comfortable in SA,” Malema said.

Cele said he had noted with disgust the reckless, irresponsible and dangerous statements calling for the attack on police officers by Malema.

Cele said such threats would not be taken lightly.

“I think the EFF leader has crossed the line. You are not going to threaten the police and think they will just fold their arms. The job of the police is clear and is prescribed in the constitution, which is to protect, prevent, combat and investigate crime.

“Police are also there to uphold and enforce the law, so no-one has the right to threaten the police when they conduct their work,” Cele said.

ANC MP Mondli Gungubele has called on political leaders to resist the temptation to sow polarisation and disunity as the country grapples with ...
News
1 year ago

The ANC has blocked an EFF motion in parliament to create an ad hoc committee to look into the living conditions of farm workers.
News
1 year ago
Next Article